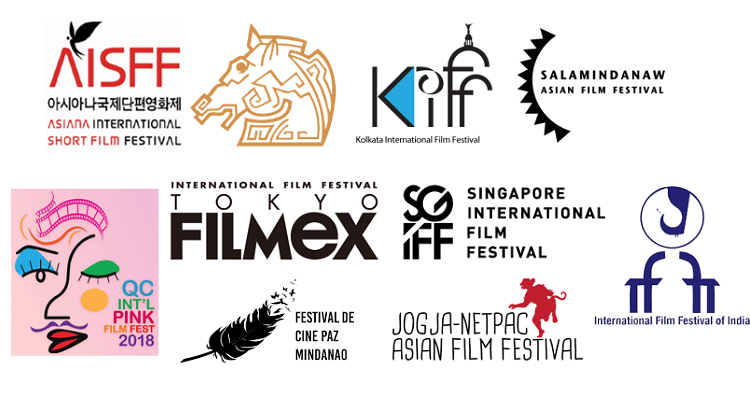 We present a list of ten festivals you shouldn’t miss.

We start this month in Seoul for the Asian International Short Film Festival. The festival’s objective is to introduce diverse short films to the international audience. The opening films will be The Human Face directed by Aline Pimentel (USA) and No Gravity by C. Parisot, J. Cissé, F.C.Cosmidis, F.Allier-Estrada, M. Lemaitre-Blanchart and L. Abraham (France). The AISFF will take place in Cinecube (Gwanghwamun, Seoul), CGV Piccadilly1958.

One week later we travel to Taipei for the Taipei Golden Horse Film Festival (TGHFF), the largest film festivals in Taiwan. Founded in 1980 the TGHFF aims to introduce prominent cinema from around the world in order to promote cinema as an art form to enhance intercultural understanding through cinema. Over the years many world know filmmakers presented their productions at the TGHFF including Abbas Kiarostami, Theo Angelopoulos, Luc Dardenne, Nagisa Oshima, Kiyoshi Kurosawa, Kim Ki-duk, Brillante Mendoza and Apichatpong Weerasethakul to name a few. This year the opening film will be Long Day’s Journey Into Night by Bi Gan (Taiwan, France China) and the closing film will be Your Face directed by Tsai Ming-liang (Taiwan).

On the same week but in India the 24th Kolkata International Film Festival will start its activities. Founded In 1995 the festival happens to be the second oldest and most prestigious film events in India. This year the opening film will be Goopy Gyne Bagha Byne by Satyajit Ray.

On the second week of November we have the start of the 6th Salamindanaw Asian Film Festival. The Festival is anchored on its mission to be a mirror (salamin) of peace (salam) in Mindanao, thus the name Salamindanaw. It aims to raise awareness and promote international cinema with emphasis on strengthening the cultural ties between Mindanao and its Southeast Asian neighbors which by tradition are linked by business and economic cooperation. Along with the screenings the festival will organize a Screen Lab designed as an intensive learning program that will provide emerging filmmakers training as well as project development sessions on their works.

Two days later but in Quezon City (Metro Manila) the Quezon City International Pink Film Festivals will take place. Some of the films presented for this year are Boys for Sale by Itako (Japan), Memories of My Body bt Garin Nugroho (Indonesia), Small Talk by Huang Hui-Chen (Taiwan) and Call her Ganda by P.J. Raval. The festival will also screen 42 short films that capture the different facets of the LGBTQA+ community. The festival will screen their movies on Gateway Cineplex (from Nov- 14-17), Cine Adarna (Nov. 19-21) and Cinema Centenario (Nov. 22-25).

Finishing the 3rd week of November we have the start of the Tokyo FILMeX, founded in 2000 by the Office Kitano, the agency and production company co-founded by leading actor-filmmaker Takeshi Kitano. The festival focus on new and independent feature films from Asian. This year the opening film will be Hotel by the River by Hong Sang-soo (Korea) and the closing film will be Ash is Purest White by Jia Zhang-ke (China).

Later we have the International Film Festival of India (IFFI). With 49 years of existence and over a decade’s presence in Goa, the IFFI has grown massively in both quantitative and qualitative terms.

Some days later we have the 2nd Festival de Cine Paz Mindanao in Zamboanga City. Launched in the 20th year of the Mindanao Peace Week, this festival aims to support and strengthen the vision of sustaining the journey for peace through cinema, making it more than a conventional film screening event where audiences watch competing films and leave immediately after screening. The festival aims to discuss peace in an interactive way which allows people to converse and share their ideas and thoughts about peace in Mindanao after years of peace dialogues and peace efforts.

Before November ends we travel to Indonesia for the Jogja NETPAC Asian Film Festival. The festival focus on the development of Asian cinema. Since its inception, JAFF has worked closely with NETPAC (Network for the Promotion of Asian Cinema), a worldwide organization of 30 member countries. Headquartered in Colombo Srilanka, NETPAC is a pan-Asian film and cultural organization involving critics, filmmakers, festival organizes and curators, distributors and exhibitors, as well as educators. It is considered a leading authority in Asian cinema.

Finally to end the month we have the Singapore International Film Festival. Founded in 1987 the SGIFF is the largest and longest running film even in Singapore. The festival focuses on showcasing international films and providing a global platform for the best of Singapore cinema. Over the decades, it has grown to become an iconic date in the Singapore arts calendar. With its focus on groundbreaking Asian cinema, this prestigious event is known for its dynamic programming and commitment to the development of a vibrant local film culture. This year the festival will open with the screening of Cities of Last Things by Ho Wi Ding (Taiwan, China, France, USA).