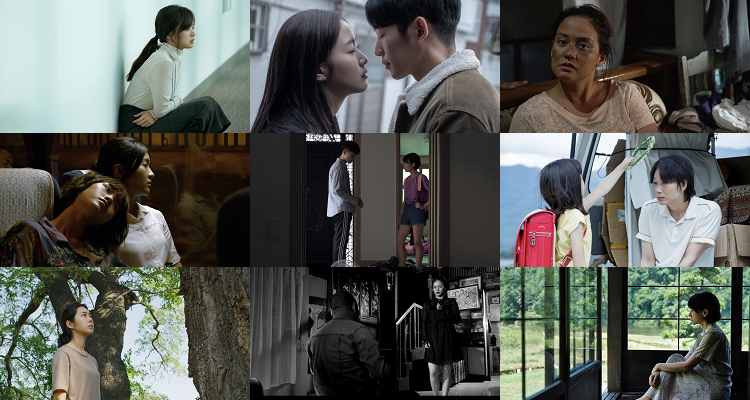 We present the last part of our list of films that you shouldn’t miss at the 24th Busan International Film Festival which will take place from October 3rd – 12th, in Busan, Korea.

Note: this article was split into four parts. At the end of this publication you will find the links to other films. Thanks – Team AFF

The plot of The Education is simply summed up. Seonghee, who is taking care of the disabled, visits the Hyeonmok’s house. Hyeonmok’s mother is a severely disabled person who cannot move and is unconscious. Seonghee and Hyunmok get to know each other little by little. But this simple summary of the plot is full of fascinating emotions that cannot be explained in The Education. That makes this movie interesting. The repercussions of small talks the characters spit out or small movements are amazing. The early part of the war of nerves between Seonghee and Hyunmok, the friendship or affection that builds up thanks to the war of nerves, their languid, somber, and sad picnic of a day, and the funny and affectionate last sequence that comes like lightning. The Education is both delicate and seductive. (JUNG Han-Seok)

The Garden of Evening Mists is the latest film by Tom Shu-Yu LIN, based on the Malaysian novel of the same title. A survivor of a brutal Japanese internment camp, Teoh Yun Ling has been working with the Malaysian authorities punish the Japanese war criminals for several years. She despises the Japanese for killing her younger sister, but to pay tribute to her soul she travels to the highlands to visit the renowned gardener Nakamura Aritomo. Aritomo refuses to work for Yun Ling but instead takes her in as an apprentice so that she can build her own garden. Residing in the tea room, Yun Ling begins working at The Garden of Evening Mists and learns to design a garden.

Yet outside of the Malaysian jungle, another war is waging in Malaysia in a continued state of emergency. Malay nationalists are fighting the British for independence, while communist guerillas are brutally killing farmers, miners, and their families in every way they can to gain control over the regions. Angelica Sinje LEE plays the young Yun Ling, while the older Yun Ling is played by Sylvia CHANG. (PARK Sun Young)

Manila in 2034. A catastrophic volcanic eruption occurred on Celebes three years prior, and Southeast Asia has fallen into permanent darkness. Nirvano Navarro who claims that he has received divine power from God is an infantilistic and schizophrenic dictator, and the sky is constantly filled with tens of thousands of surveillance drones trying to hunt down traitors. Soldiers are everywhere, recklessly killing civilians. Millions of people have already lost their lives to a contagious disease called the “dark killer”, and Southeast Asia is in complete ruins.

The Halt is a minimalist sci-fi film about the people living in a dystopia ruled by darkness. This cynical film is reflective of reality, and the crazy despot Navarro is easily reminiscent of certain leaders, not just for the people of the Philippines but for the people of all countries who have experienced military regimes, dictatorships, or leaders who were madmen. In this sense, The Halt is an allegory for the universal age. This black-and-white film is four hours long, but Lav DIAZ’s fans may be surprised by the relatively short running time. (PARK Sun Young)

The Director asks fundamental questions about doubts and trusts. Takeshi, who is treated as an odd one in his village, makes a living by mending used items and serves his mother. One day, an elementary school student, Aika, was kidnapped at a Y-shaped intersection in the middle of a rice field near the village. Aika’s friend Tsugumi is in a very painful and difficult position because she was with Aika only minutes before she was kidnapped. 12 years later, Tsugumi starts work after graduating from high school. One day she meets Takeshi at a village festival and sympathizes with his difficult situations. On the day the festival is held, a girl disappears at the same intersection and villagers suspect Takeshi. In despair, Takeshi returns to the village and sets fire to his house to block people’s access. A year later, Tsugumi, who lives in Tokyo, returns to her hometown to help prepare for the village festival and meets Jenjiro, a widower beekeeper living in an area where elderly residents live across the intersection. They plan to revitalize the village but fails, and as a result, Zenjillo is ostracized. Zenjillo’s growing sense of isolation eventually brings him to the end of a terrible crime. (Jay JEON)

Misu (Kim Goeun) and Hyunwoo (Jeong Haein) get to know each while working in the bakery where Misu inherited from her mother. Hyunwoo, who entered a juvenile detention center after being entangled in the unfortunate incident, gradually finds stability in his mind after meeting with Misu. Misu likes Hyunwoo and Hyunwoo likes Misu. However, Hyunwoo, who was forced to rejoin the group of rather bad friends, will be separated from Misu for a while. In the meantime, time has passed and Misu has become the editor of a publishing company.

The two meet again and become lovers, but there are other obstacles to their love. It is a new film directed by JUNG Ji-woo, who has produced outstanding works such as Blossom Again, A Muse, Fourth Place, and Heart Blackened. KIM Goeun’s acting is lovely, Jeong Haein’s acting is reliable, and the two are harmonious. Supporting actors’ performances are also impressive. JUNG Jiwoo’s unique subtlety shines through this film. (Jung Han-Seok)

Joy, the mother of a six-year-old girl named Angel, is fatigued and frightened of her alcoholic husband Dante’s abuse. One day, Dante starts an argument for something trivial. He lashes out, inflicting physical violence on Joy. When Angel gets hurt in the process, Joy decides not to hold back and slashes Dante with a nice in self-defense. With Angel in her arms, Joy rushes to the police station. Thus begins Joy’s lawsuit against Dante for domestic abuse. But in a society where domestic violence is deemed a private family matter and an irrational system where the verdict depends on an expensive lawyer, Joy’s battle is not one that can be won easily.

Verdict is a feature debut by Raymund RIBAY GUITERREZ, whose film Judgment, which addresses the same issue, was invited to compete in the Short Film Competition at the 2018 Cannes Film Festival. Filmed with the same actors as in the short, Verdict keenly exposes the patriarchal Philippine society rampant with violence and prejudice against women, and the legal system where money can change the meaning of justice. It is an excellent film that shows the director’s persistence in dealing with social issues, with camera work that does not display or intervene in its portrayal of violence. Christopher King makes an impressive posthumous appearance as Dante. Verdict received a Special Mention at the Orizzonti section of the Venice Film Festival. (Park Sun Young)

The extension of the contract, which has been on the line for years, puts Seoyeong (Cheon Woo-hee) in a nervous breakdown and puts her in pain. Her lech boss, her cold-hearted colleagues, and her immature mother who passes the financial burden on her… Seoyeong hears things and the fear of heights becomes almost a serious disease. The only thing that makes Seoyoung happy is her secret love affair with her boss, Jinsu (YU Taeoh). However, this love affair is also in jeopardy. Around that time, a building’s exterior wall cleaner (JEONG Jae-gwang) enters her life. Director Jeon Kyesoo, who has shown a variety of genre skills ranging from fantasy musicals to romantic comedies, has been releasing his new film for the first time in a long time. Vertigo takes no haste, takes a heavy step, reaches the pinnacle of emotion, then adds a blow to the final scene, leaving a long aftertaste. (Jung Han-Seok)

A wound that was covered up without being cured properly is just a pause. Or maybe it’s slowly festering while you don’t notice it. Way Back Home is a story of a victim sexually assaulted 10 years ago facing the secret she covered up in the past. Jeong-won, who forgot the past and lives a peaceful marriage, receives a phone call from the police one day. The man who sexually assaulted her has been caught and the news shakes up the couple’s life and breaks down their daily lives. Director PARK Sunjoo calmly follows the post-incident life and recovery process in the film, which has expanded her short story, Mild Fever. Pain comes alive even though there are no provocative or direct descriptions. The characters’ reactions and careful production, which focused on the repercussions around the incident, captures honestly the hard time they suffer and the process of their wounds are healed. It is also good to watch that the current of emotions sweeping under the calm but still surface of the water is not missed. (SONG Kyungwon)

The multi-talented director Kongdej Jaturanrasmee has completed the calm yet powerful coming of age story of the young girls freshly graduated from high school becoming young adults, that cast the most popular idol group in Southeast Asia, BNK48. Sue (Jennis Oprasert) is helping her father running an old pork noodle soup restaurant in a sleepy town. In spite of her inexperience of air travel or abroad, she secretly has been preparing for a scholarship program to study in Finland. Although she doesn’t have a significant life goal, she believes studying abroad might enlighten her to find a dream.

With her friends, she is spending her last week in the hometown filling the checklist in, exchanging money and packing her luggage up. Her father eventually finds out her plan and gets worried about her future. On a journey that she might never return, she reflects her relationship with friends, love, and family, sometimes with arguments or reconciling and embracement to build herself up as the protagonist of her own life. (Park Sungho)

Han is an elementary school student who lives in a remote mountain village with his grandmother, after his parents’ divorce. His mother left for a city to search for a job. One day, on his way home from school, Han sees a man using a net to catch wild sparrows, one of which falls to the ground, barely breathing. Han brings the injured sparrow back home, but the bird dies. When he tells his grandmother about the man catching wild sparrows, she tells him that he should never hurt the birds because birds in the forest are spirits of the land that protect the forest from evil spirits. On the same day, his mother makes a surprise visit home, but seeing her for the first time in so long makes Han feel awkward around her. Han has to leave the mountain village because the school will shut down the next year. He doesn’t want to leave his grandmother, but he has no choice to follow his mother to the city. Han doesn’t understand his mother’s life in the city. Han’s mother grows frustrated at the reality, as she is unable to provide Han a better environment to grow up in. Their relationship becomes fraught with tension, and the audience is left to wonder—Is there a spirit that will protect this little family? (Chae Bohyun)

This article is split into 4 parts to see the other parts go here: PART 1 — PART 2 — PART 3
You may also be interest in knowing the 10 documentaries we selected for the Busan. To see the article please go here: Busan Docs 2019.