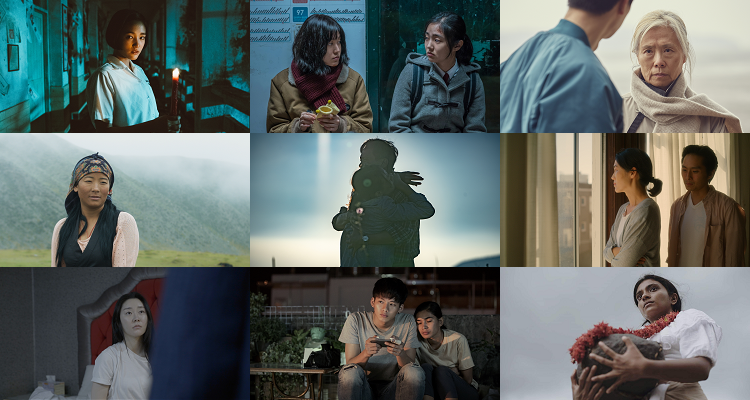 We present a list of forty films that you shouldn’t miss at the 24th Busan International Film Festival which will take place from October 3rd – 12th, in Busan, Korea.

Note: This article was split into four parts. At the end of this publication you will find the links for other films. Thanks – Team AFF

A-ho is a boy from an ordinary family. His father is a driver education instructor, his mother is a hairstylist, and his older brother is a high school student set to enter college. A-ho’s brother A-hao is a model student, and his father has high expectations of him. On the other hand, A-ho is a troublemaker and the black sheep of the family. One day, a terrible misfortune befalls A-ho’s family, and A-ho, who learns about his girlfriend’s pregnancy, gets into serious trouble because of his friends and ends up in a juvenile detention center. His father’s anger and contempt for A-ho grow extreme, and a series of crises completely shatter the family. Released from the detention center, A-ho tries his best as the head of his family, but society does not accept him and his life continues in a downward spiral. A Sun presents a realistic portrayal of the process in which an ordinary family pushed to the brink of their limits comes to embrace each other. (CHAE Bohyun)

In an overwhelmingly charming Alpine region in northern Nepal, Khando runs into a Khampa soldier while working in the mountains, falling in love and giving birth to a son. Her life, however, enters a tough path of turbulence like the unpredictable bad weather. Her husband has left home for such a long time that nobody knows if he is still alive, her brother has sold home and properties, then her sister has sold all the jewelry. The seven-year-old son, who is supposed to be the hope of her life, turns troublesome skipping school class and harassing other children. The villagers hesitate to let their children get along with him.

A strong and tough but uneducated woman, Kando hardly earns some buckwheat by working long hours at other’s farms. Therefore, she feels sorry for having little time to care for her son, but it is such a burden to become a good mother as well. Ama Khando gently depicts the stories of people pioneering and reconciling destiny, in which Fema DOLKER, who plays Khando, shows impressive acting. (PARK Sungho)

Hyo-jeong, a 69-year-old woman, is raped by a male nurse aide. But few people, including the police, are willing to believe her words. Most people question whether that handsome young man really would have done so. The male nurse aide claims that it was a consensual sexual relationship. Only Dong-in, who loves Hyo-jeong dearly, is cooing to free her from her injustice.

An Old Lady chooses a social event that is not so common. However, the movie does not easily provoke the audience with the scarcity of events. Nor does it claim to be an incendiary moral play. Rather, the drama gracefully depicts the overcoming story of Hyo-jeong and Dong-in, who are determined to reveal facts, fulfill their righteousness and protect their love in spite of being ignored and shunned. (JUNG Han-Seok)

Will I know the answer when I grow up? Another Child is a film that responds to this age-old question that everyone has done once. Juri (KIM Hyejun), a high school student, finds out that her father (KIM Yoonseok) and her friend Yoon-ah’s mother Mihee (KIM Sojin) are having an affair. The daughter tries to hide this fact from her mother (YUM Jeong-ah), but the father’s infidelity is finally discovered. Although the movie is about an affair, it focuses on the confusing emotions and changes of characters. The two shy girls become resentful to their own parents, but the adults cannot easily give up their love, which throws us something to think about away from the stereo-type affair dramas. The story is not about the relationship between parents and children, but about the deep-rooted coming of age stories that show the agony and weight each person bears. It’s Actor KIM Yoonseok’s directorial debut film, which highlights a calm and stable production that focuses on the characters. (SONG Kyungwon)

On the Tibetan grasslands, Darje and Drolkar lead a serene and ordinary life with their three sons and Darje’s father. The death of Darje’s father throws the whole family into sorrow, but soon Darje and Drolkar are caught unawares by an unexpected pregnancy. A subtle conflict arises between the two as Drolkar is concerned about having another baby due to China’s birth control policy, while Darje believes that the baby is the reincarnation of his father. Tibetans who believe in the Buddhist teachings of rebirth see death not as a break from life or an end of life but as the beginning of new life through rebirth. Because of their faith, death makes them think about what is more important between life and death, spirit and reality. The film’s title Balloon refers to a condom, which sparks a series of embarrassment and dilemma, breaking the harmony of the family. Balloon is the latest film by Tibetan auteur PEMA Tseden, whose previous films Tharlo and Jinpa have also been screened at BIFF. Similar to his previous works, this film addresses the Tibetan life and values, but unlike his other works, Balloon has more mass appeal. (CHAE Bohyun)

The Malaysian communist party engaged in decades-long armed struggle in the jungle to gain independence. Babies who were born during the war were sent outside the jungle for survival. Boluomi is the father of one of those babies, Yifan, who is also the protagonist of this film. The Taiwanese Malaysian father and son live resent each other, with their secrets and pains of the past buried deep in their hearts. Angry at his father as well as the racial discrimination and inequality he faces in Malaysia, Yifan leaves for Taiwan, the country of his grandparents. In Kaohsiung, he meets Laila, an illegal immigrant from the Philippines. Treated like a stranger even in the country of his ancestors, Yifan sympathizes with Laila and grows closer to her. It is heartbreaking to watch the glum history of Malaysia and the two young people care for each other in a strange land despite their language barrier. Director LAU Kek Huat is himself a Taiwanese Malaysian. His works have consistently delivered messages about his roots. His shorts and documentaries have been well received at previous editions of BIFF, and he returns this year with his first fiction feature. (CHAE Bohyun)

In 1814, Ceylon(now Srilanka), with its beautiful nature in the Indian Ocean, is facing a period of upheaval about to become part of the British Empire. Prasanna VITHANAGE depicts the survival and love of the outcast in the lowest place in society through Children of the Sun. The British intervene in tensions seeking conspiracy between the royal family from South Indian descendant and the Buddhist noblemen, but the plan failed. The family members of the aristocracies are captured by the royal army, and are forced to commit suicide.

Young Tikiri chooses to get remarried with an untouchable, Vijaya, but she cannot change her attitude as a former upper class. She brings crisis in the community eventually leading both to go deep in the mountains in exile. The most dangerous hazard is not the disease-spreading bugs or wild animals, but other human beings. As many villages are devastated by either royal army or British troops, survivors have to cope with the periods of chaos when basic security is not guaranteed. (PARK Sungho)

Based on a personal essay by Chang-rae LEE published in The New Yorker, Coming Home Again is an intimate family drama about a mother, a son, and the burden of family expectations. Chang-rae, a first-generation Korean American, has returned to his family home in San Francisco to care for his ailing mother. He wants only to fulfill his role as the supportive son, but must also come to terms with his conflicted emotions towards his mother.

The film takes place over the course of one full day. During this day, he attempts to prepare a traditional Korean dinner for New Year’s Eve. The one she always cooked for the family. The care and precision that goes into preparing this meal gives him time to reflect on the intense relationship between them. Memories about it become a doorway into a woman who was so much more than the mother he thought he knew.

In 1962, a sense of desolation and tension permeate the society. Fang, a twelfth grader at Tsuihua Senior High School, falls in love with Zhang, a counselling teacher. Troubled by the problems at school and home, Fang feels that Zhang is the only person who understands her. Longing for freedom, Zhang forms a study group with his colleagues and students, including Yin and Wei. Reading the banned books allows them to be liberated for a brief moment but at the same time, they put their lives in great danger.

One day, Zhang vanishes into thin air, and only Fang and Wei, an eleventh grader, remember him. Together, Fang and Wei start looking for the disappeared teacher but find the school gradually slipping out of the world they are familiar with. Then in a realm dominated by ghosts and spirits, the pair are forced to face the terrifying truth….

Films about the bright life of youth buried in Noryangjin Academy can be found easily in the Korean independence feature/short movies. It may mean that Noryangjin has become a symbolic place for sharp realities. And this is where Eunmi lives. Eunmi is also preparing for the civil service exam at Noryangjin Academy, but her preparation does not seem to be smooth. Seemingly taciturn and somewhat daunting, she often opens her windpipe with light love and sex. Around that time, when she sees a man at a study group and develops a better relationship, strange rumors about him begin to circulate.

The cinematic structure of Eunmi is concise and iterative, and its brevity and repeatability are not blemishes, but the best aesthetics that redouble the devastation, peril and loneliness that have been ingrained in Eunmi. Eunmi is a terrible report about someone who has lost the way in a closed circuit. (JUNG Han-Seok)

This article is split into 4 parts to see the other parts go here: PART 2 — PART 3 — PART 4
You may also be interest in knowing the 10 documentaries we selected for the Busan. To see the article please go here: Busan Docs 2019.