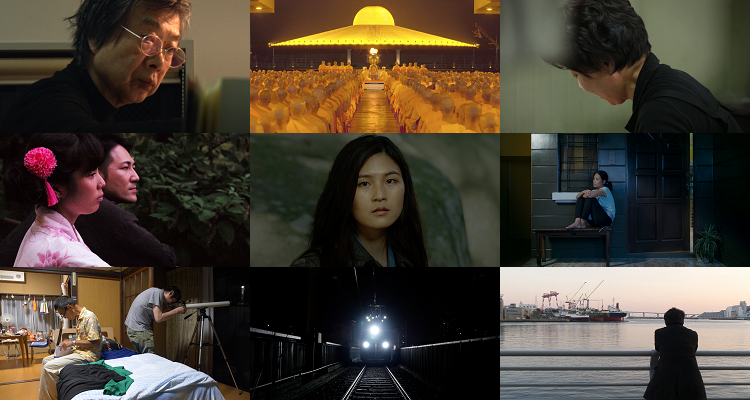 We present a list of ten documentaries that you shouldn’t miss at the 24th Busan International Film Festival which will take place from October 3rd – 12th, in Busan, Korea.

Book-paper-scissors is a so-called master artisan documentary, which tells the story of KIKUCHI Nobuyoshi, a respected Japanese book designer. Throughout his life, 75-year-old KIKUCHI created the cover of over 15,000 books, all by hand. The process of drawing with his pen, cutting with scissors, pasting with glue, and sometimes crumpling and straightening paper has a similar fate as that of paper books today, gradually losing their footing in the digitalized world. Filmmaker HIROSE Nanako filmed KIKUCHI for three years with curiosity and admiration, thinking of her late father who was also a book designer. Seen through HIROSE’s eyes, KIKUCHI’s work is not much different from that of a writer or other artists, yet ironically KIKUCHI sees his own work as more functional and technical than artistic. But there is no doubt that bookmaking is a form of art. book-paper-scissors is a beautiful, meditational documentary without frills, just like KIKUCHI’s book covers. (KANG Sowon)

Shaped like a round, golden spaceship, Dhammakaya is the largest and richest Buddhist temple in Thailand. With millions of followers, it has become an icon of Thai Buddhism and the mecca of all Buddhists in the world, yet it also reeks of suspicious money matters. In 2016, the abbot of Dhammakaya is charged with money laundering and acquisition of stolen properties. The ensuing clash between the military regime that tries to enforce the law and the all-powerful temple with many followers is intense. Filmmakers Nottapon BOONPRAKOB investigates this incident from a rather unique point of view—he spotlights someone who may be considered a religious fanatic. The camera’s gaze, as it traverses across politics and religion, power and corruption, belief and blind faith, maintains a cold calmness of an investigator without a hint of emotion. The impressive directing creates a tense atmosphere, pointing out the evils of religion without criticizing the ignorant yet innocent fanatical followers. (KANG Sowon)

Directed by Werner HERZOG, Family Romance, LCC depicts a Japanese company selling fake friends and false family members. Money can’t give us happiness, but it can provide an imitating life that comforts us. Director HERZOG was inspired by “Family Romance Inc.”, a thriving company where they hire actors who can play all kinds of roles, from friends and family members to guests and even mourners.

Ishii YOUICHI, the founder of the company, appears in the film himself and explains his role to us like a reality show. The scopes of Family Romance Inc. are diverse. Their roles range from a returning father of a 12-year-old girl who abandoned her when she was little, to a father who cannot participate in his daughter’s wedding because he is an alcoholic, recreating the happy moment a lottery winner felt, and helping a young woman who wants to be chased by paparazzi to enhance her reputation online. HERZOG only observes all these marginalized people coolly and never judges. Special Screening in 2019 Cannes Film Festival. (Jay JEON)

At 4:30 AM, Mom is preparing for a huge meal all by herself. In charge of the eatery at the construction site of the Incheon Airport Terminal 2, Mom easily makes a meal for hundreds of construction workers, but her labor is not easy to watch for her filmmaker son. HAMBA begins with director BANG Sungjun’s voiceover: “A year after my dad died, my mom said she wants to run a hamba in Yeongjongdo. “And most of the film is full of scenes showing a mother working and her son helping with the delivery when he can. The special moments in this film are every moment of affection between the mother and the son—that is what this film is all about. In the last sequence, the son who is studying filmmaking shows his short film to his mother. Presenting the mother’s labor to overcome sorrow and the son’s movie to remember his father, HAMBA simply portrays the process of a wife and a son who have lost their husband and father overcome their sorrow in their own ways. Fortunately, life after the terrible loss isn’t all full of tears. (KANG Sowon)

In the Philippines, women who wish to find employment abroad as nannies, domestic workers, or caregivers come to this training center. In addition to crucial know-hows on neatly and perfectly performing house chores, women learn foreign languages, role-play to prepare themselves for humiliation and suffering that are to come, and even receive training on protecting themselves from suicide or sexual harassment. Overseas takes a look at the Philippines, the largest supplier of the household labor around the globe, and its system for training and mass-producing women migrant workers. The film does not aim to criticize the system. Instead, it focuses on the women who will most likely become modern slaves outside of their motherland and illustrates how they exercise their right to decision-making, how they protect their dignity, and how they share sisterly love in this process. To support their families, these women have to leave their own children behind and head over to foreign countries. It is not hard to imagine what their future will be like, but YOON Sung-A uses long takes to capture their individual faces, which are not something we imagine. A second feature-length documentary by YOON, a Korea-born French filmmaker living in Belgium, Overseas was unveiled at the Locarno Film Festival this year. (KANG Sowon)

To Koreans, the ‘president’s 7 hours’ refers to the seven hours in the morning of April 16, 2014, when over 300 souls were lost in the sea. What was the president doing during those hours? However, the film President’s 7 Hours does not focus on clarifying the president’s whereabouts on the day the Sewol ferry tragedy occurred. Instead, it goes back a long time in history to inquire into the mentality of the president who did nothing in that desperately important time and to understand why PARK Geun-hye could not but become the kind of president she was. The film traces her life back to the 1970s, when the leader-follower relationship began between PARK, who became the first lady of the Yushin regime, and CHOI Taemin, the leader of a pseudo-religion. It then examines the Sewol ferry incident, CHOI Soonsil Gate, candlelight rallies, and finally the impeachment. This ‘investigation into the people who dominated PARK Geun-hye’s dreams and time’ according to Director LEE Sangho paints a ridiculously absurd picture for the Republic of Korea in the 21st century, complete with hypnosis and people appearing in dreams to prophesy the future. President’s 7 Hours gives us a chance to look back on the past seven years that Koreans lived through. (KANG Sowon)

Things That Do Us Part is a documentary that reframes the stories of three women fighters who dove into a tragic war in modern Korean history, using witness statements and reenactments. The three historical women presented in the film are: Jeong Jeong-hwa, an independence activist who fought for Korea’s independence against Japan from China, Kim Dong-il, a woman to fought in the Jeju April 3 uprising, and Ko Gye-yeon, a ppalchisan (transliteration of partisan, referring to the Partisan Troops of the North Korean Army) in Jirisan Mountain. In a rather surreal manner, Director IM Heung-soon brings back these three women who desperately fought for the country’s independence and unification in the mountains and valleys of 21st-century Korea. Based on the three women′s autobiographies, three modern actresses play the role of the three historical women. Their performances bring together two timelines that are 60 years apart, and the experiences of the real historical figures and the actors overlap as well. Time is the thread that connects colonialism, wars, and the division of the Korean Peninsula to the present. Going to and from art galleries and movie theaters, IM naturally weaves moments that arouse surreal, poetic sentiments into the documentary and creates ruptures in the world of “HIStory,” full of heroic men. Things That Do Us Part is a new version of modern Korean history that has been created through the experiences of women fighters. (KANG Sowon)

The subway begins and closes the day of the city of Busan, and there are laborers who work in inconspicuous places to make that happen. A conductor who leaves his night-duty room and start working at four in the morning; workers in the control room sitting in front of numerous monitors; workers who inspect the subway cars; cleaning ladies who sweep the stations; repairmen who clean, tighten, disassemble, and assemble the cars; and workers who repair and inspect the tracks.

Underground captures their labor with a gaze of respect but does not treat them equally on camera. The camera spends more time on certain laborers because there are hierarchy and discrimination in their labor. Mainly, more difficult and dangerous kind of labor is undertaken by non-regular workers—it is the issue of ‘outsourcing death.’ Director KIM Jeong-keun, who captured the labor movement at Hanjin Heavy Industries in the documentaries Get on the Bus and The Island of Shadows, turned his camera to the non-regular workers of Busan Metro. Speaking less and observing long, the film carefully and cautiously tells the audience that there is another ‘underground’ under the underground. (KANG Sowon)

Diagnosed with Attention Deficit Hyperactivity Disorder (ADHD) at the age of 41, filmmaker TSUBOTA Yoshifumi pays a visit to his cousin Makoto, who suffers from a pervasive developmental disorder. Since his mother passed away, 61-year-old Makoto lives alone in the house he grew up. What Can You Do About It is a two-and-a-half-year record of the two men who come to understand and befriend each other as they struggle with their illnesses. Perhaps the reason TSUBOTA sought out Makoto, whom he never met before, was to understand his own illness. But his illness is rarely seen on screen, which is mostly filled with his admiring gaze toward Makoto. Naturally, the viewers see Makoto through TSUBOTA’s eyes, regardless of TSUBOTA’s presence within the frame. And since there is no gaze that objectifies people with disabilities, the film is full of humor and affection rather than compassion and awareness. What Can You Do About It begins as a self-documentary and transitions into a buddy film about two men who grow closer together through challenges or into a human drama imbued with peculiar humor. It is a documentary with outstanding directing by the long-time fiction filmmaker TSUBOTA Yoshifumi. (KANG Sowon)

After five years, five people share their memories of April 16, 2014: a college student who was then a senior in high school, a cafe owner in Seochon, a middle school teacher in Incheon, a human rights activist, and a fish farmer in the seas near the site of the accident. Their memories of that day are not much different from ours—shock, anger, helplessness, and deep sorrow. Yellow Ribbon retraces the memories and trauma of the Sewol ferry disaster for the past five years. Unlike most people who have grown insensitive to the memories of the tragedy over time, the five people in this film are transforming the grief-stricken memories of the tragedy into something they can share today. People say that we need to fight oblivion so as not to repeat history, but these five people say, “We’ve never tried to remember or recall the incident. But April 16 always comes around. “ Director JU Hyunsook looks at the aftermath of the Sewol ferry tragedy and its impact on Korean society, while bitterly ruminating on Korean society before the incident—about the kind of government Koreans elected and the price they had to pay for their decision. Yellow Ribbon finds hope in the collective trauma that Koreans have experienced five years ago. (KANG Sowon)