The 19th Shanghai International Film Festival (SIFF) that will take place between June 11th to 19th have release a new poster that continues the original classic red of the festival mixed with solid or obscure colored lines and blocks, displaying the profound artistic and cultural deposits of the film festival. 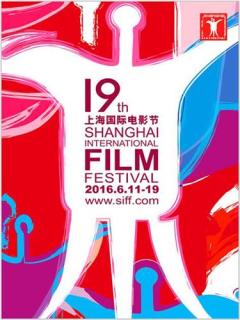 By means of piecing and piling, the official poster of SIFF delicately outlines its core element, a “Golden Goblet”. It dances elegantly in light and shadow, clarity and obscureness, making the poster refined and ingenious. The various colors on the poster: the classic red of the film festival, the innovative blue of Shanghai and the confident authoritative elegant purple are the integration of various cultures, implying that the Festival will be a grand revelry of entire Shanghai, while the large white space symbolizes that the Festival is a big arena where the practitioners and the old and new friends in the film circles across the world communicate and cooperate. In this “colorful world,” they’ll create “goblet wonders,” walking hand in hand to the beautiful and romantic future of film industry.
With “Asia, Chinese films, and new talent” as the positioning of SIFF and the concepts of making constant innovations and interactions while inheriting the tradition, the poster tries to show that SIFF will, with its inclusiveness, openness and hospitality, draw the world’s attention and the people of the film circles across the world to Shanghai, and create festive atmosphere in this international cultural metropolitan.
The SIFF is the only Class-A international film festival in China recognized by the International Federation of Film Producers Associations (FIAPF). Since the inception of SIFF in 1993, the Festival has been upholding the principle of presenting and encouraging diverse artistic creation. So far, it has become one of the important platforms for the countries worldwide to show their achievements in film.