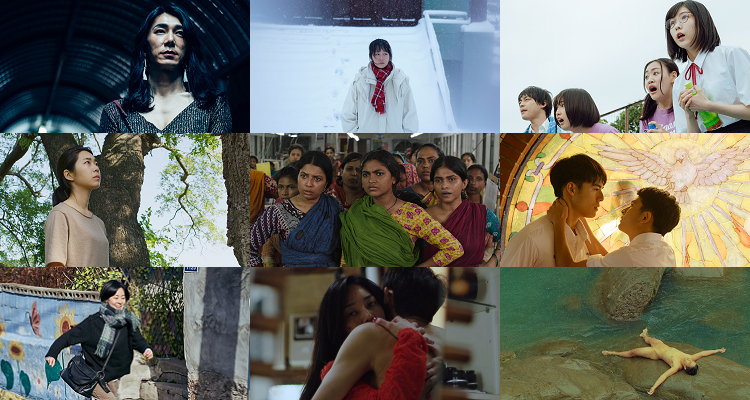 We present the 2nd part of our list of films you should not miss at the 15th Osaka Asian Film Festival which will take place from March 6th – 15th (2020) in Osaka, Japan.

About the festival:
The Osaka Asian Film Festival aims to facilitate human resources development and exchange, to invigorate the Osaka economy, and to increase the city’s appeal, through providing opportunities to watch excellent Asian films, supporting filmmaking in Osaka and attracting filmmakers from Asian countries and regions to Osaka. Promoting Osaka worldwide as a gateway city for Asian films, and engaging with many people from the fields of culture, art, education, tourism and business, from Osaka and all of Asia, OAFF works as an open platform to contribute to the development of Osaka and cinema.

After the sudden death of the director she had been planning to spend a lifetime working with, a film producer named Chan-sil is now unemployed and it seems nobody will employ her on other films. At the age of 40, jobless and penniless and living in a cheap room run by a shifty old woman who looks askance at her, Chan-sil begins to work as a cleaning lady at an actress’ place. By chance, she meets a young man who teaches French to the actress and she feels a strong attraction to him, perhaps a feeling more meaningful than desperation or maybe a result of the anxieties over her wasted youth, lack of a love-life, and broken career. Can she produce a happy end to her own life?

Director KIM Cho-hee creates a wonderfully wry comedy that is alternately maudlin and amusing as it picks apart female desire and travails through a bumbling, charming and sympathetic character embodied in a winning performance from lead actress KANG Mal-geum. (Jason Maher)

Nowadays, Bangladesh is the “worldwide factory” in the garment industry. Shimu, a 23-year-old woman is working at one of the export-oriented garment factories in Dhaka. Faced with difficult working conditions, she decides to start a union with her co-workers. Rubaiyat HOSSAIN, one of the most promising filmmakers from Bangladesh, based the film on the real experience of a worker who was a union leader, and describes their struggles as well as their bravery. Their lives have been deeply related to our lives in Japan; we are wearing clothes “made in Bangladesh.”

Following her debut with “Meherjaan” (2011) and her second film “Under Construction” (2015), this film has also asked the way of women’s destiny through her feminism lens. The film symbolically represents the reality of Bangladesh, the unity of women who fight together beyond social classes, and the very colorful clothes of the working women contrasted against the dust and the darkness with the shortage of electricity in the city of Dhaka. This film is the very first film by a Bangladeshi filmmaker at Osaka Asian Film Festival! (Minamide Kazuyo)

Adam is a rough-and-tumble 15-year-old boy born to a conservative father who is a pastor and an illiterate mother. Adam’s initiation into puberty takes an interesting spin, beginning with the arrival of a transfer student, Angel, an older girl with a dark past. Adam and Angel get along well but as they start to hang out, Adam begins to menstruate. It turns out that he was born with both male and female genitalia. This is the start of a painful journey where Adam finds himself lost in a painful transformation as he explores the spiritual and physical limits of gender identity and the ambiguities of fate and desires.

“Metamorphosis” is the first Filipino film that features an intersex character. Intersex characters are a rarity in cinema and the topic rarely discussed in wider society but this film, told with sympathy for all characters to bring out their humanity and make them relatable, presents a well-shot tale that makes the topic accessible for all. (Jason Maher)

Meet Evon, formerly known as Andy. She is a transgender woman aged 55 years. Making the transition late in life after losing a wife, saw her lose her job, family, and become subject to prejudice in society where transgender and gay people face job discrimination and run the risk of being murdered. When she loses her best friend, things look bleak, but a chance meeting with a mother and a son with nowhere to go and nobody to care for them after they escape an abusive relationship changes her life in this melancholy yet hopeful film that shows how tending to the humanity in others and showing kindness are important for making life bearable. (Jason Maher)

It is the first round of the national high school baseball tournament but we’re less concerned with what goes on in the baseball diamond, rather, it is the people in the stands who we watch. A former baseball team player named Fujino and two members of the theater group, Yasuda and Tamiya, have come to cheer the team. Miyashita, once the smartest person in the grade, has just lost her position to the captain of the brass band and is on her own. As these characters interact while watching a baseball game, their hidden thoughts also become apparent… “On The Edge of Their Seats” is based on an award-winning stage play created by a theatre group from a high school in Hyogo Prefecture. (Jason Maher)

Kobe, 1995. Ichiko and Tasuke lose their only daughter Reiko in the earthquake and this leads to the two divorcing and beginning new lives. As they resume their daily life, Ichiko and Tasuke gradually accept the death of Reiko. 2018. After a long separation, they go to the aquarium of memories of dreams and watch a dolphin show. (OAFF 2020)

Jeong-won and her husband Sang-u are a happily married couple who are about to move into a new home and welcome a child into the world. Their happiness begins to crack when Jeong-won receives a call from the police informing her that the man who sexually assaulted her ten years ago has been caught. Jeong-won had kept this incident a secret from Sang-u but now her peaceful life begins to buckle as her past comes back to disrupt the relationships with those around her.

Director PARK uses great restraint to tell a realistic story of a person who uses distance to protect herself and others from a horrific crime finally turning around confronting it. As hard as this is for the main character, she shows great bravery and has support from those around her in a moving and constructive drama about how such a trauma can be overcome. (Jason Maher)

Gu Xi and her brother Gu Liang live just outside of a city in a makeshift cottage. It may lack modern amenities but it is full of love as the two support and care for each other without question. They scrape by with money earned from odd jobs, but Gu Xi may be about to lose her work as a maid at a hotel because of her undocumented citizenship status. Things change when Gu Liang gets a girlfriend, the beautiful and cosmopolitan Qingchang who comes from a rich family. Money and goods like cassette players and clothes come their way but so too does the complicated world of adulthood as the siblings are drawn into a murder mystery involving a dead body found floating at sea. As winter sets in and temperatures plunge, the relationship between Gu Xi, her brother Gu Liang, and his girlfriend becomes increasingly unclear and a mysterious tape with evidence repeatedly brings Gu Xi to the cusp of a momentous decision that may cause her to lose everything. A slow-burn drama that luxuriates in shots of the beautiful landscape and the performances of the actors, the film is mesmerising to watch. (Jason Maher)

One day, middle-aged photographer and retouching artist Kai encounters Kyoko, a beautiful woman and model with a huge and ugly scar on her body. She asks Kai if he can erase the scar in her photographs of herself and create a perfect and flawless body by his retouching skills. Kyoko is fascinated by her new perfect looks in her photographs. At the same time, she is hesitant to show the world and her fans her ideal figures as in her photographs or to show her real self, scars and all. She is torn between the two selves and falls into confusion. Kai feels that only he can salvage Kyoko from her anguishes, and he is determined to love her at all costs, even if it means death to him. “Woman of the Photographs” is a film that depicts the fascination and the passion in this encounter between two people awakening for the first time, to love and empathy. (OAFF 2020)

In 1988, martial law ends in Taiwan and two schoolboys, A-han and Birdy, are about to enter into an illicit love affair after meeting in the school band led by a Canadian priest named Oliver. While the whole country commemorates the late president, the two boys bask in each other’s presence as A-han’s affection for Birdy is awakened. However, society is homophobic and the threat of violence and social shaming enacted by adults and their fellow teens causes the two to come into conflict as they edge closer to physically enacting on their passions for each other. Birdy pushes A-han away by pretending to fall in love with a girl and this misunderstanding separates them. In desperation, A-han confessed to Father Oliver about his sexuality, only to be cut off again but love knows no bounds and the boys are meant to be together… Inspired by real events, the film is emblematic of the changes in Taiwan which became the first country in Asia to legalise gay marriage. (OAFF 2020)

To see the second part of this article, go here: PART 1

For more information about the programme and schedule please visit the official website of the festival here: http://www.oaff.jp/