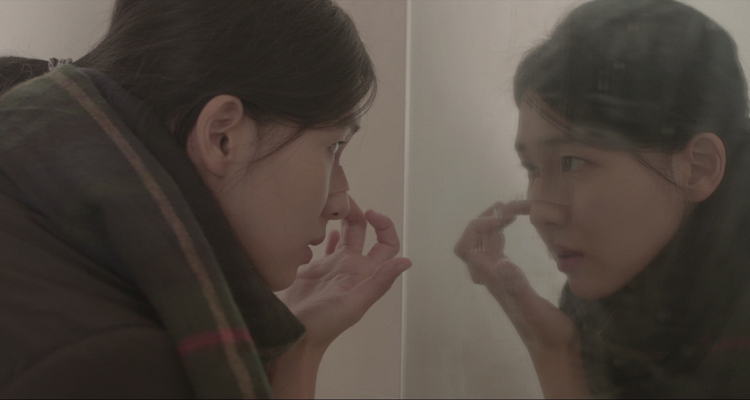 Sebastián Nadilo shares his comments on “Nose” a Korean short story directed by Hanna Yoon. We also share an interview with the director.

Nose is a powerful film that shows the difficulties of a young woman in denouncing her abusive partner. It is also a social critique towards a patriarchal society that prefers men over women. The movie has some well-crafted scenes that will make the viewer emphasize with the character’s suffering. There is a lot to be said about the film but first let’s talk about the plot.

Hanna is a young woman who works as a private mathematics teacher. One day, upon realizing her boyfriend, Hyun-soo, is not answering her calls she decides to go to his apartment. There she is greeted by his mother, Min-ok. Hanna discovers his boyfriend suddenly moved out without telling her. Min-ok is packing her son’s belongings so Hanna decides to stay and help her, which leads to some awkward interactions between them. Hanna’s nose appears to be broken, people around her ask about it but she keeps making up stories. What is Hanna’s hiding under her bandage?

Nose is deep in content and can be analyzed in various ways. Yoon managed to create a story that talks about a physically abused victim, but it is also a strong criticism towards the macho culture in Korean society. The two male characters, Hyun-soo and Ja-woo (the student) behave aggressively around Hanna.

One of the biggest achievements by the director was to create scenes of extreme tension without showing physical violence. This can be seen when Hyun-soo invites himself to Hanna’s house and refuses to go when she asked him. His calm but overly aggressive attitude made me feel very nervous. Other remarkable scene is when Hanna was trying to make his private student do a math exercise. He tries to court Hanna but obviously she refuses, the student then says something that is very common in misogynist men after being rejected, he says “you don’t even turn me on”.

The character of Hanna is very credible. She shows all the symptoms of a victim; she feels ashamed and guilty of what happened, she continues to make up stories about her bloody nose and starts to get isolated from people. Hanna’s tribulations changes when she meets the mother of her ex. I think both characters empathies with each other. Min-ok is part of that unique “mom-culture” that exists in Korea where a mother goes to her children’s house and take care of them even when they are adults. She also believes she knows her son when in fact she only knows little things about him. For example, she didn’t know her son attempted to commit suicide which leaves her speechless.

To end this short review, I would like to highlight again the good performance of the actors that made the characters believable and managed to create very tense moments. I wanted to know more about the film, so I decided to contact the director and ask her some questions. What follows is my interview with her…

How did you come up with the story?
Several years ago, I looked for a new house to live with my roommate, at that time in one house we looked, there was a mother. Her son wasn’t there because he was in his school. She said that she sometimes came to her son’s house for cleaning it up. In Korea, there is unique and twisted ‘mom-culture’ which mom comes her children’s house and takes care of her son or daughter although they are adults. Strangely, her image in that house had lived in my brain, and I started to think about women who have children in this society. Patriarchy was leading that woman. To them, their children, especially the ‘son’ is a trophy. When I was born-1990’s-a notion of preferring a son to a daughter was at peak. What’s worse, a lot of daughters were disappeared by abortion. As I started to relate this kind of women’s life with dating abuse, which was a big issue in Korea these times. This is how I came up with scenario for ‘Nose’.

Min-ok (the mother of Hyun-soo)

The film talks about a very hard and sad reality for many women. Did you had difficulties filming it?
I feared that I might just use a character of Hanna, a victim of violence, without sympathy and affection. I needed to develop the scenario many times, and then staves advised me. It gave me several great ideas, but it was hard. Some people wondered why Hanna was hit by Hyun-su, but I tried not to describe violence. I thought it could be reckless to arrange this kind of scenes. Handling of the scenario wasn’t easy. During the first day of filming, my face got hurt like ‘Hanna’. I and staves were too embarrassed. Now I think, it still makes me dizzy.

Looking at the film it reminds me of some of my female friends who, sadly, experience violent situations. May I ask if the film was inspired by close or personal experiences?
Yes, it was. Some friends’ stories inspired me. A scene is a dramatized thing of my real experience.

Min-ok (Hyun-soo’s mother) character seems like a good mother. She knows that her son had many girlfriends. But do you think she knows about her son’s actions? I say this because one of the last scenes she gives a big hug to Hanna.
Min-ok doesn’t know Hyun-su’s action in this film. Before shooting ‘Nose’, the actress who performed Min-ok consulted me about how much information Min-ok knows, and we made a decision. Min-ok thinks ‘I know my son well’, but actually she doesn’t. I think this happens to a lot of parents. Min-ok is grateful to Hanna, so she hugs her. I think she has a kind of fellowship with Hanna as a woman.

I would like to go back to a scene in the movie. When Hyun-soo invite himself to Hanna’s house. For me that scene was particularly unsettling, and I must admit I felt nervous. I know this was scripted by some of the reactions by the actors seems genuine, specially Hanna’s reaction. Was this something scripted or you let the actors interact themselves to see their reaction?
I directed just some technical actions like gazing time or dialogues as I thought about emotions of two characters. They did act with dialogues and directions in scenario, but they made it freely with communicating each other at that time with keeping dialogues script. When Hanna was not in frame, Hanna reacted Hyun-su, and Hyun-su did same.

The movie talks about the impossibility of a woman to talked about her violent partner. She keeps hiding why she has a bloody nose. But there is one scene that really strike me. When she goes to the English group session. They see her and a man asked, “what happened to you? did someone hit you?” To what the group laughs, but Hanna answers to that question with a timid “Yes”. But the group didn’t listen to it. In your own view is this something that happens often that people would avoid talking about this subject or they are not as open as they want?
Before a scene of English study room, Hanna already was questioned twice about her bloody nose by Jae-woo’s mom and Min-ok, but Hanna lied about it. But on that scene, Hanna tells people “yes.” As a victim, she had hided herself from people, but after experiencing some kind of emotions, she faced her suffering. Then people at that study room were not interested her situation actually. Many people wondered others and sometimes enjoy gossip about them, but it is difficult to have real sympathy and listen to somebody’s affront. It is easy to be indifferent. That’s what I wanted to explain.

The world appears to finally pay attention to violence and mistreatment towards women specially thanks to the feminist movements and the #MeToo movement. Korea from what I know is starting to pay attention to this issue. Some women in the KPop industry also started to speak up and some well-known singers are being expose. Do you think women are empowering themselves to speak up? Or is media only paying attention because they are celebrities?
A few years ago, among a lot of people, I used to think that ‘Am I only one who is a feminist?’, but many women were starting to feel anxious. In Korea, various methods of feminism are going along. By social media or street demonstration, daily activities, women are resisting sexism. Some radical feminists get rid of her high heel and short skirts which have been tightened them like a corset. But I think there are more conservative circumstances in entertainment world. What is worse, the public blamed a female entertainer because she didn’t wear her bra. Some even were victims of sexual harassment. Women still are pressured in many ways, but this world is changing gradually. Speaking up is really important.

Do you think your film could help women to speak up and men to think about their own implicit machismo?
I don’t think a film can change someone’s life, but a film is effective about consoling somebody and showing edges of a real world. I want that my film to influence people even if it’s small.

How did the audience react to your film?
When this film was screened at the Busan International Film Festival, people’s reactions were divided. Some thought it was too partial and obvious. Some asked “Why did Hanna didn’t resist a man strongly, Hyun-su who was rude from the first?”, others said “I can’t understand Hanna.” On the other hand, some people told me it was nice and delicate. Some cried while seeing it.

What’s your next cinematographic project? Could you share it with us?
It would be a long-length film. A main character is a female who was born overcoming a notion of preferring a son to a daughter in 1990. The summary is that the main character goes to a house of her father who have lived far from her for a long time. It is a comedy and includes someone’s growth. I want to make a humorous and warm story.

I would like to thank Hanna Yoon for letting me see her movie and for answering my questions. Also, thanks to our readers for their continuous support. Have a great week.