10 Films you cannot miss at the Asian World Film Festival 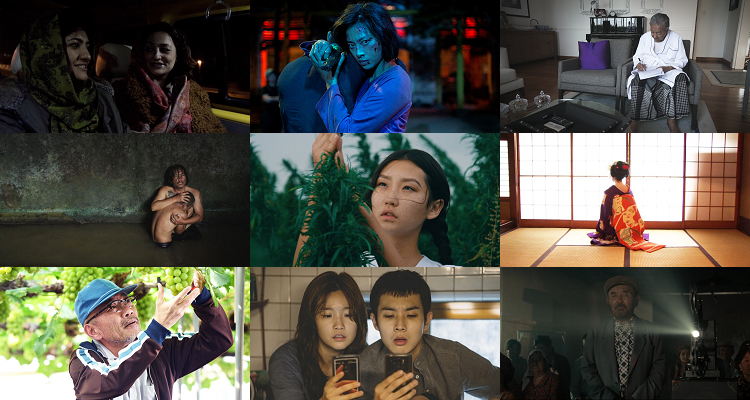 We present a list of ten films you shouldn’t miss at the Asian World Film Festival which will take place November 6th – 14th, 2019 in Los Angeles, California (USA).

The sanatorium ‘Aurora’, situated next to the mountainous Issykul Lake in the Central Asian country of Kyrgyzstan, was built in Soviet times and has not changed since. The sanatorium serves as a mirror of the entire country with all events happening in one day. Often tragic, sometimes comedic, the situations reflect some of the country’s main problems today, including the violation of women’s rights, poverty, corruption and Chinese expansion.

Farideh was abandoned in a holy shrine in Iran when she was 6 months old. Adopted by a Dutch couple, she was taken to the Netherlands to start a new life far from the one she was born into. Despite her parent’s disapproval, almost 40 years later, Farideh sets off on a personal journey to her motherland in search of her biological parents and in turn discovers more than she could have ever imagined. Finding Farideh is a soul-stirring story that connects West to East and captures what it means to exist between two identities.

When a little girl is kidnapped by a trafficking ring, they soon find they messed with the wrong child. Her mother, a notorious former gang leader, is close on their trail and will go to any lengths to bring her daughter home.

Hannari – Geisha Modern is a documentary film that seeks to capture the geisha and their culture for what they are truly meant to be. Geisha are artists and entertainers, who devote their lives to the traditional arts and a traditional way of life. Respected and admired as purveyors of traditional Japanese culture, the geisha are truly an embodiment of dedication, discipline and a relentless drive for perfection. This film brings the audience up close and personal with these magnificent artists, entertainers, or themselves living works of art. Appearances by various characters in and around the geisha community provide a glimpse into this functioning and independent community that is truly unique to Japan. For the very first time, the geisha are captured in a manner that allows the audience to see, hear and to feel for themselves the true beauty of the geisha.

M for Malaysia documents the 2018 Malaysian General Elections when the people of Malaysia, led by a 92 year-old former Prime Minister, overthrew one of the longest ruling governments in the world. Despite endless barriers thrown at them, the tense campaign pushed on with the most surprising result in the country’s history.

Juno is just a child when his father abandons him in their village of Center Java. Alone now, he joins a Lengger dance center where men shape their feminine appearance and movement. But the sensuality and sexuality that come from dance and bodies, mixed with the violent social and political Indonesian environment, force Juno to move from village to village. Even if on this journey Juno receives attention and love from his dance teachers, his weird aunty, his old uncle, a handsome boxer and a Warok, he still has to face by himself the battlefield that his body is becoming.

Parasite, which won the Palme d’Or at the 72nd Cannes Film Festival, is director BONG Joon ho’s seventh feature film. In this movie, Director BONG Joon ho, who has promoted genre customs in his own language, highlights the class problems that have not been seen clearly before. The family members of Kiwoo (CHOI Woosik), living in a semi-basement house, are all out of jobs. One day, Kiwoo gets a high-priced private tutoring position for the son of CEO Park (LEE Sunkyun) of an IT company through the introduction of a friend. Starting with it, Kiwoo’s whole family begins to infiltrate the rich family, living like a parasite. The film, which represents a family tragicomedy, creates a unique rhythm by combining comedy and thriller at crossings. Among the universal narratives, Korean details are carefully inserted into the class conflict, which is shaped by a vertical structure. It is the final version of “BONG Joon ho’s Genre,” which was created after a mix of family dramas, thrillers, comedies and horror stories, the unique emotions of Korean society, and a sense of problems reading the times. (Song Kyungwon)

Shyrakshy: The Guardian of the Light by Yermek Tursunov – Kazakhstan | 2018 – 90 minutes

The end of the World War II. Soviet soldiers come to a small town in Germany. A lot of buildings are ruined and there are still sounds of bomb explosions and whistling bullets. Young kazakh soldier saves an old civil German man from death and helps him to hide in a safe place. The old man gives him a bag with the most valuable thing that he has – a portable projector and some films. 30 years later the former soldier became a legendary figure. He travels to small distant villages and pastures to show films. He spent his life travelling from one village to another, from house to house. The children called him Tarzan, because of the film «Tarzan» that they like so much. But professional cinema theaters come to big and small cities replacing our Tarzan to more remote villages.

The first volume of the trilogy “The Nomads” of the outstanding writer Ilyas Yesenberlin – “Kazakh Khanate. Diamond sword” historical film based on the novel” Diamond sword” includes the epoch of the first kings of the Kazakh Horde – the kings of Kerey and Zhanibek who led the nomadic Kazakh tribes.

The middle of the XV century. The time, when several nationalities (Ulus) were formed instead of the ruined places of the world ruler Genghis Khan Empire. In 1465, one of the nationalities (Ulus) – the direct successor of the “Ak Orda” state, Orys khan generation, Kerey and Zhanibek sultans settled nomadic tribes, which were against Kok-Orda ruler Abulkhair Shaibani, under the same flag, founded the “Kazakh Khanate” of Ak Orda. But did they get independence so easily? Abulkhair Khan, who has been the king of the Orys khan and the sole ruler for 40 years, started his destructive campaign against his enemies Kerey and Zhanibek, with the support of the Ma’ruenahr commanders. However, this was a great loss for Abulkhair khan and he died. Thus, the Kazakhs were able to return the capital of the Shaiban tribes – Syganak and their Golden throne without loss.

Haruna Soma (Riko Fukumoto) comes from Japan’s northernmost island of Hokkaido to Okayama, in western Japan, on a school trip. Her ailing grandmother has asked Haruna to buy her some of the region’s famous “Muscat of Alexandria” grapes as a souvenir gift, but Haruna loses her wallet, and the small amount of change she has left is only enough to buy two “Riku no Hoju”, a confectionary made from the alexandria grapes. Her grandmother expresses delight with the gift, and Haruna is moved to return to Okayama and apply for work at Minamoto Kitchoan, the company that makes them. Her winning smile convinces the company president to hire her, but her trainee assignments to shop sales, production, and product development do not go well, and she is sent out to assist at one of the vineyards that supply alexandria grapes. The farmer, Shinsuke Akiyoshi (Naoto Takenaka), does not want her help and tells her to leave, but she persists. Meeting another grower, Tatsuya Yashiki (Masataka Nakagauchi), she learns about grape-growing. Shinsuke, it turns out, lost his only son Taro ten years before, and is determined that his vineyard will end with him. Vines his son grafted just before he died are about to reach the end of their productive life, and Shinsuke plans to have them and their greenhouse destroyed. Haruna tries and fails to convince him to regraft these vines and thus keep Taro’s memory alive. Haruna was a national-level high-school curler until injury ended her career; her sister, still a curler, visits and suggests that Haruna return to Hokkaido, and she is about to do so when the area is hit with massive floods that leave Taro’s former greenhouse buried in a sea of mud. Haruna goes out to the vineyard and sets to work digging…