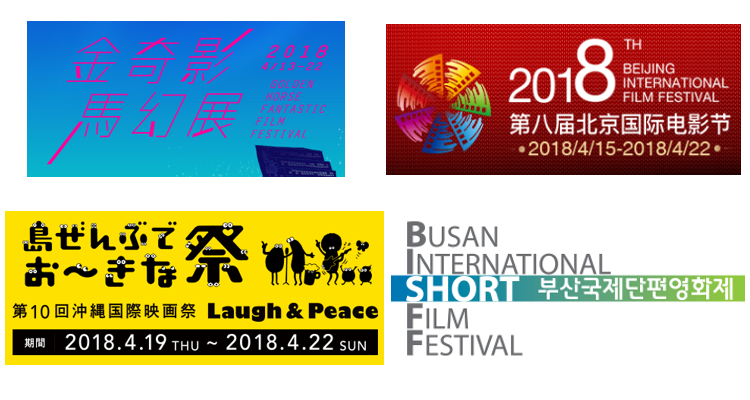 We present a list of four Asian Film Festivals you cannot miss this month.

We start this month in Taipei where we are going to attend the Golden Horse Fantastic Film Festival (GHFFF), Taiwan’s first fantasy theme festival. Since its first edition on 2010, the GHFFF covered various genres like sci-fi, horror, thrill, musical, comedy, martial arts, animation, romance, and cult films, leading the audience to explore beyond the boundary of imagination. This year the festival will open with Isle of Dogs directed by Wes Anderson and it will close with Let’s Cheat Together directed by Lien Yi-Chi.

Almost at the same time we have the opening of the 8th Beijing International Film Festival. The festival is supported and sponsored by the government of the Municipality of Beijing.

A few days later the 10th Okinawa International Movie Festival will start its activities. This year the organizers hope to start developing entertainment as a major industry in Okinawa. The OIMF is organized but the Okinawa International Movie Festival Executive Committee and managed by the Yoshimoto Laugh & Peace Inc. The festival focus more on domestic films rather than international movies. It also screen a special section dedicated to productions done by Okinawa filmmakers.

Finally we end this month with the 35th Busan International Short Film Festival. Launched in 1980 the BISFF aims to create the film-making friendly environment and finding talented film professionals. It has introduced many different kinds of films, including 8mm and independent films made by students and general public. Many young talents in those days are now taking the lead in the Korean cinema. The BISFF renamed itself as the Busan Asian Short Film Festival on May 19, 2000, intending to extend its horizon into Asia even getting entries from abroad and introducing excellent but not known Asian directors, which was the first try in Korea. At the opening ceremony two shorts will be screened; Tama Tu by Taika Waititi (New Zealand) and The Burden by Niki Lindroth von Bahr (Sweden).