We share the first report made by the Film Distribution Observatory.

About this report:
The Film Distribution Observatory (FDO) is a long run Research & Database about the movie distribution in the NCR Region (Philippines). The main objective is to know how big chain cinemas manage and distribute movies. Cinemas managed by FDCP and UPFI were not included. We also skipped smaller cinemas such as Cinema Centenario, Black Maria Cinema and Cinema’76. The list of the 65 cinemas covered by this reseach can be seen HERE. 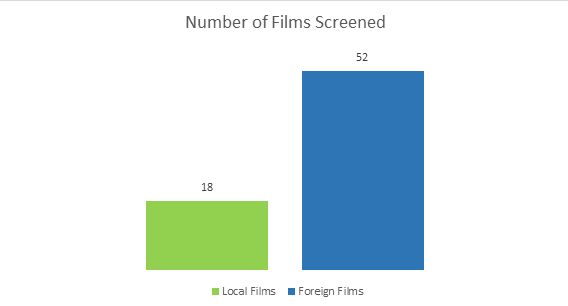 Last month there was 70 films screened, 52 (75%) were Foreign Films and 18 (25%) were Local Films. There was 5 local Premieres: Amnesia Love by Albert Langitan (Viva Films), Ang Pambansang Third Wheel by Ivan Andrew Payawal (Viva Films), My Perfect You by Cathy Garcia-Molina (Star Cinema), Never Not Love You by Antoinette Jadaone (Viva Films) and Simplicity by David Hulbert and Kazuhiko Parungao (Idoltap Productions). Cine Lokal screened Ma’Rosa by Brillante Mendoza (for 5 Days), and Women of the Weeping River by Sheron Dayoc (for 6 Days). Sinag Maynila 2018 took place from March 7th – 15th in some SM Cinemas and screened 7 films. 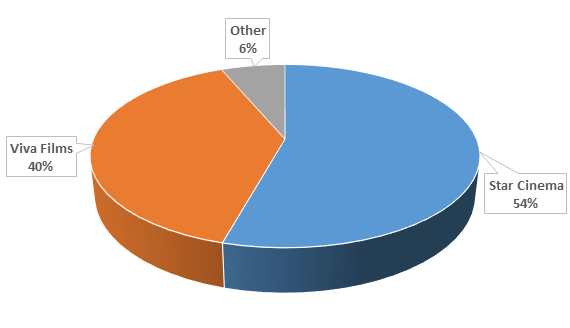 When looking at the production companies releasing movies we found out that only two companies lead the industry. Star Cinema (from ABS-CBN) came on top with 54% of the screenings due to the projection of Sin Island, The Significant Other, and My Perfect You. And Viva Films, got 39% of the screenings thanks to the screenings of Meet Me in St. Gallen, Amnesia Love, Ang Pambansang Third Wheel and Never Not Love You.

When looking at the distribution variation of Local Films we can see that since the premiere day Amnesia Love and Ang Pambansang Third Wheel decrease their number of screenings. Something that didn’t happened with My Perfect You that shown an increase of the screenings in the first 4 days and then continued at the top. Other important thing to mention is that Never Not Love You premiere with 333 screenings becoming the film with most screenings on the premiere day.

When looking at the 5 most important cinema houses we can see that Megaworld Lifestyle Cinemas was the chain that screened less Local Films with only 10% of their screening time dedicated to them. It wasn’t until the premiere of My Perfect You that Megaworld started to show domestic films. On the other had SM Cinemas was the cinema chain that shown most Local Films with 23% of their screening time dedicated to domestic films. SM Cinemas was also the ONLY chain that screened all of the 18 Local Movies presented during March.