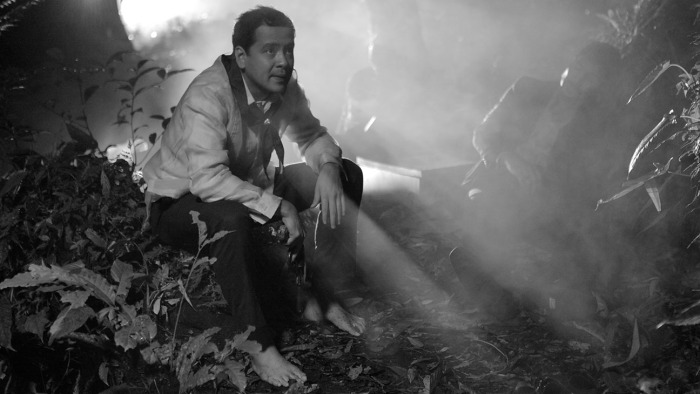 After the screening of his latest film on October 31st, the Filipino director along with two of his stars, Hazel Orencio and Joel Saracho meet the public on a Q&A session at the 29th Tokyo International Film Festival, in this post we share some quotes from that talk. 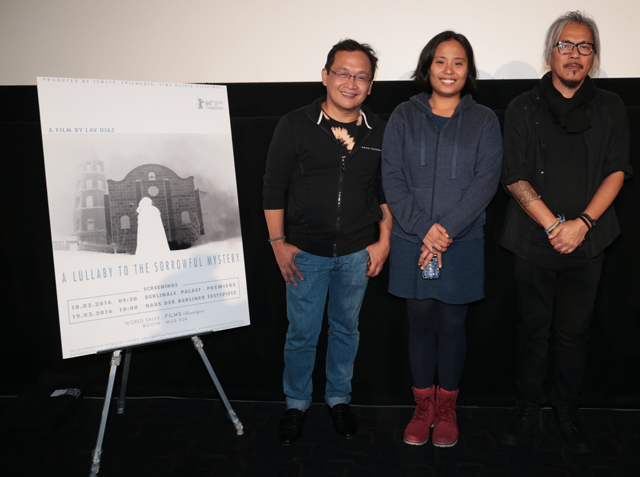 First Joel Saracho broke the ice by congratulating the audience for surviving the 8 hour film. After that Lav Diaz warned the audience that if he seem distracted was because he just arrived from USA where he attended a meeting at the Harvard University. Diaz who has a fellowship at Harvard described it as ““just hanging out there, trying to find my way in this overwhelming academic culture there at Harvard.” Adding “I’m programming Filipino cinema from the 1970s epoch. If you check the year 1976, there’s like a peak in Philippine cinema. Most of the works from that year are masterpiece from Lino Brocka, Mike De Leon, Mario O’Hara — they’re all masters.”

About his latest film Diaz said: “The film is very particular about a period. This is the Philippine revolution, the years 1896 to 1897. It’s a critique and examination of that period of history, the nature of that evolution. Not just the spectacle that happened. It’s more of an examination and a confrontation of that part of our history. So you don’t see the battles. You see real characters, living during the period. We integrated the very works and personas that inspired that revolution — like the works of Dr. Jose Rizal, the novels “Noli Me Tángere” and “El Filibusterismo.” We borrowed parts of those novels, the characters and symbols. And another thread of the film is the Filipino mythology. So these three threads, they work together. They are integrated. It’s the whole gamut of that period.”

As far as where his inspiration comes from he explained, “First of all, the inspiration of my works, is the Filipino struggle. It’s our story. And I think any culture can relate to our struggle also. It’s more of adapting the stories that I’m familiar with.”

When he was ask about his limitations of having a broad audience for his films he commented, “You can see, it’s not being shown in so many places, only in festivals because of the length and the kind of framework that we’re doing. With this kind of mise en scene, they’re always putting us in the ‘alternative cinema’ sections, because of the length. That’s why it’s very imperative to have this kind of space at festivals.” He added, “Oh yes, it was commercially release, but it bombed. Nobody went to the film. If anything, we have the 2 most popular actors there, but because it’s 8 hours only a small percentage of the country went to see the film. But we’re not complaining. It’s part of the struggle, the propagation of this so-called ‘serious cinema,’ There’s no easy fix. You cannot rush it. You have to give it and just let it grow. Culture grows that way”. “Cinema can wait” he added with a smile. “If you create cinema that is not part of the convention, you must have an awareness that the audience is not there. You have to develop that kind of audience.”

As far as how the movie was developed he said, “We shot the film in 22 days only. But the preparation was 17 years. I started the script in 1999.”

Saracho talked about the process of making the film, “We woke up every day, not knowing what scene would be shot. Because the process is: Lav wakes up at 3:00 in the morning and plays his guitar, then writes and at 8:00 the actors are handed the script for the day. Each scene would be about three pages long, which would be shot in one day. So really have to have that skill to memorize and do whatever he wants you to do. And it’s driving the actors crazy, most of the time. But basically, at 6:00 in the evening we’ll start drinking anyway, so it’s fine.

He added, “Seriously it was a very creative, very serious process, especially for us actors. Everything was shot in one long day. And you have very little room to commit mistakes, because otherwise you have to do everything from the top, all over again.”

Andrés Bonifacio y de Castro is considered to be one of the most influential proponents in the struggle against Spanish colonial rule in the Philippines during the late nineteenth century. Today, he is still celebrated as the father of the Philippine Revolution. Director Lav Diaz examines this myth and undertakes another expedition into the eventful history of his native land. The film’s various loosely interwoven narrative threads are held together by an exploration of the role of the individual in history and their involvement in political and social developments. Bonifacio’s widow is searching for her husband’s missing dead body; as she and her followers stumble deeper into the jungle, they become entangled in the dense thicket of their own guilt and responsibility. The Spanish governor tries to play off the various rebel factions and their utopian visions against each other. At the same time, a badly wounded companion of Bonifacio reflects upon the victims a revolution inevitably creates. The film’s high-contrast black-and-white photography makes the journey into the past abstract. Mythology, facts and a vibrant sense of history merge.

* – This article was created using the information provided by the Tokyo International Film Festival.