10 Films you cannot miss at the Cinemasia Film Festival 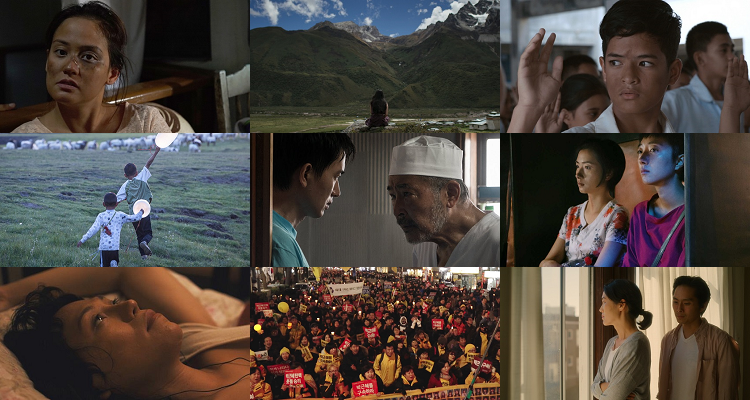 We present a list of ten films that you shouldn’t miss at the Cinemasia Film Festival which will take place from March 4th – 8th in Studio/K & Rialto Cinemas, in Amsterdam, Netherlands.

About the festival:
CinemAsia weaves Asian stories that help to enhance Asian visibility in culture and media, through which we foster an inclusive society.

Part of the economy of a rural Tibetan society depends on exchanging rams and ewes during mating season. Meanwhile the citizens themselves are struggling with their own sexuality, in a clash between modern and traditional values. So when two young boys blow up their parents’ condoms, father Dargye (Jinpa) and his wife Drolkar (Sonam WANGMO) are faced with the practical consequences: they’ve lost their only anti-conceptive option.

China has recently introduced its one-child policy, which forbids starting large families. When Drolkar accidentally becomes pregnant with her fourth child, her fragile family life is about to collapse. The moral dilemma of what to do with the unborn child forces her to choose between the law and Buddhist tradition in this thoughtful and endearing drama from Tibetan master director Pema TSEDEN. (Cinemasia Film Festival)

The film is an emotional journey home for aspiring writer Chang-rae (Justin Chon), who cares for his ailing, cancer-stricken mother. And yet he is haunted by the sacrifices made as a Korean immigrant family in America. He cooks a New Year’s Eve dinner for his mother, one his mother always cooked for the family, trying to recreate the traditional Korean dishes he learned from her. Family sagas surface as they face down her inevitable death. (Léo Soeanto)

Chen Liang (LU Yulai) has left his native Henan, where he lived with his ill mother and elderly grandmother. Wanting to pursue a new life away from his responsibilities and family pressures to have a respectable career, he decides to move to Japan. However, settling down in a new place isn’t as easy as he thought. (Léo Soeanto)

This gripping debut feature based on a true story is a perfect example of how social media can shape, intensify and problematize sensitive narratives. It’s something that the fourteen year old farm boy John Denver (Jansen MAGPUSAO) is about to find out. His life is rapidly turned upside down when a video of him assaulting a classmate goes viral. Although the video is taken out of context and uploaded with the most malicious intent, nobody could have predicted the tragic outcome of this viral story gone wrong.

In his sensitive role of the misunderstood teenager, debuting actor Jansen MAGPUSAO proves to be an incredible screen presence. Debuting screenwriter and director Arden Rod CONDEZ is an equally talented newcomer, one of the more promising new voices to emerge from The Philippines, where John Denver Trending won six prizes at the Cinemalaya Philippine Independent Film Festival. (Cinemasia Film Festival)

An undocumented Filipina immigrant, paranoid about deportation, works as a caregiver to a Russian-Jewish grandmother in Brighton Beach, Brooklyn. When the American man she is secretly paying for a green card marriage backs out, she becomes involved with a slaughterhouse worker who is unaware that she is transgender. (Cinemasia Film Festival)

Lunana: A Yak in the Classroom is the story of a young teacher from the capital of Bhutan who is set on a path of self-discovery when he is sent away to the remote mountain village of Lunana. He finds himself in a situation that is primitive compared to the more ‘Western’ comforts he is used to. The Himalayan village has no electricity, no textbooks, and a severe lack of luxury supplies. Through the warmth and generosity of the villagers, he becomes a changed man that learns to treasure the experience he initially feared.

Fittingly, the entire film was shot with the use of solar batteries, because Lunana actually hosts the world’s most remote school and cannot provide the electricity a regular film shoot requires. Behind the scenes the film crew went through a parallel situation as the main character, which might explain the endearing and loving portrayal of this remarkable place. (Cinemasia Film Festival)

Tezuka’s Babara tells a bizarre love story between a famous novelist Yosuke Mikuro (INAGAKI Gorô) and Barbara (NIKAIDO Fumi), an odd, sexually perverted woman who he picks up from the street. As Mikuro develops a maniacal obsession over her, he also begins to suffer from some mysterious hallucinations.

Based on a classic 1974 adult manga by Japanese manga artist TEZUKA Osamu, and directed by his son TEZUKA Makoto, this adult-orientated fantasy is not only quirky and wild, but also sarcastic about Japan’s political realities. The collaboration with jazz musician HASHIMOTO Ichiko and WONG Kar-wai’s cinematographer Christopher DOYLE (Chungking Express, 1994, In the Mood for Love, 2000) also brings the poetics of eroticism in the film one step further. (Cinemasia Film Festival)

Award-winning Chinese director DIAO Yi’nan (Golden Berlin Bear winner for Black Coal, Thin Ice in 2014) returns with another brooding crime noir, this time rain-soaked and dripped in sleazy neon lighting. It’s under these circumstances that a sudden brawl breaks out between local mobsters. Amidst the ensuing chaos, some gangsters are killed and a cop is shot, leaving anti-hero Zhou Zenong (HU Ge) as the most wanted man on both sides of the law.

The Wild Goose Lake is DIAO Yi’nan at his most moody, bloody and thrilling. It played in the prestigious competition section of the 2019 Cannes Film Festival and won the China Film Critics Association Award.

A spousal fight escalates to a bloody conflict in the opening scene of Raymund Ribay GUTIERREZ’ gripping debut film. Joy (Max EIGENMANN) is used to this kind of fights with her husband, a small-time criminal with an alcohol habit, but this time he has gone too far: their six-year-old daughter Angel is also hurt in the erupting violence. Finally, Joy takes a stance and reports her husband to the police. However, the odds of finding justice in the sprawling Philippines’ metropole of Manila are very slight.

GUTIERREZ captures the ensuing legal battles in intense shots and an urgent form of editing. His tense film style recalls the work of his mentor Brillante MENDOZA (Kinatay, 2009). This cutthroat depiction of bureaucratic indifference towards victims of domestic abuse garnered him a deserved Special Jury Prize at the 2019 Venice Film Festival.

April 16, 2014. A ferry departing from Incheon to the island of Jeju sinks. On board of the ship is a total of 476 passengers and crew. 304, of which 250 high school students, die a horrible drowning death. The sinking of the MC Sewol kickstarted a widespread political and social reaction within South Korea, aimed at the ferry’s captain and crew, ferry operator, and the entire PARK Geun-hye administration for its dramatic disaster response.

Five years later, director JU Hyun-sook retraces Korea’s national trauma by following five people with their own memories and scars of that fatal morning. Yellow Ribbon is an urgent and heartfelt documentary giving a unique insight in the aftermath of one of South Korea’s most sensitive traumas in recent history.

For more information about the programme and schedule please visit the official website of the festival here: https://cinemasia.nl/