Organizers of the Karlovy Vary International Film Festival (Czech Republic) announced today the full line-up for the festival. Oda sa Wala by Dwein Baltazar will be featured at the Official Competition. 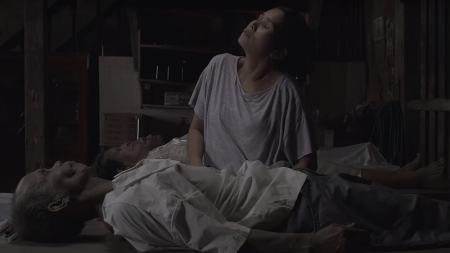 Middle-aged Sonya lives an uneventful life. She gets up, goes to work, takes care of her father – who is foundering in his own little world – and then goes to bed. Her mundane existence is no longer disrupted even by mourners who occasionally turn up at the failing funeral shop Sonya is trying to keep afloat, albeit with ever waning enthusiasm. And then something happens to ripple the surface. A body appears on the doorstep one day and there’s no-one to claim it. The solitude of the dead woman reminds Sonya of the loneliness she herself is struggling with, and a friendship emerges which goes beyond unusual. Ode to Nothing is a meticulously composed, inscrutably tender film about the desire for companionship and about myths that don’t deserve to be exposed. (Anna Purkrábková)

About the director (QCinema 2018):
Dwein Baltazar first and foremost is a mother, who has a love hate relationship in writing and still dreams of becoming a theatre actress someday. Currently, Baltazar writes and directs for miniseries and movies. Her debut film, Mamay Umeng(2012) took home the Best Picture prize at the 14th Jeonju International Film Festival held in South Korea. Baltazar’s sophomore feature, Gusto Kita With All my Hypothalamus is set to have its international premiere at Busan International Film Festival this October 2018.