We present the list of winners of the 19th Jeonju International Film Festival, which is taking place from May 3rd – 12th, in Jeonju, South Korea. 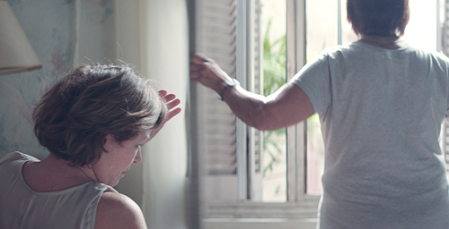 Chela and Chiquita have lived together for over 30 years. However, Chiquita who is involved in the fraud ends up in prison, Chela faces her reality. Chiquita was the one worked actively and Chela mostly has stayed in. But the reality Chiquita is confronted makes Chela come forward. She goes through the reality liquidating the properties and preparing the legal action. The film gazes at the reality Chela has experienced quietly like naturalism and shows the last phase of her life through her acting and character. Chela participates in the new social gathering. Through that, she ruminates on her past 30 years. This film was introduced in Berlinale this year. It is a very important film of this era that casts the subtle reality living in the South America as a female engraving the impression of late love and new relationship. [LEE Sang-yong]

We follow obscure, hazy images into a retirement home in Istanbul. Outside, the landscape changes with threatening roars from construction machinery. A creaky-voiced woman talks about the horrors of the Armenian genocide. An old pianist plays a mellow tune and a blind photographer fiddles with his camera. The inhabitants roam about the place like ghosts. Director Shevaun Mizrahi visualizes the memories of these old, lonely people on a remote planet, and creates a wholly new kind of magic through images. Distant Constellation haphazardly blends painful memories from the past, reflections on life and surrealist humor against the backdrop\ of the malicious development scheme. The result is a wonderful work that discovers a hypnotic rhythm amongst people stuck in the limbo inside the dilapidated house. [JANG Byungwon]

Karoline and Thomas are adopted. They finally come to Korea to find their birth mothers in their 30s. They spend time of unfamiliarity and the past in Korea. Adoptees gathered in the guesthouse, share their memories and incidents through the conversation. Korea is not the place to find mothers right now. Their experiences and stories are all different. Someone became subject to racism, another feels disappointed to be told by European parents that he didn´t look like a Korean. By the way, the awkward and unfamiliar feeling is the same as it was in Europe. The people in the guesthouse look special to each other ,suddenly, even their fellowship is also strange. The film comes into the audience´s hearts as if it muses over the time, sometimes putting the irritating feeling of reality forward. That feeling imbues the style and mood of this film. [LEE Sang-yong] 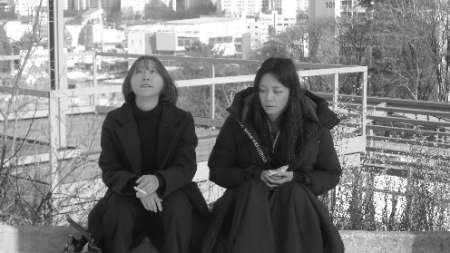 The Land of Seonghye, the second feature film by Jung Hyeongsuk traces the hard life of 29-year-old woman Seonghye for a significant portion of running time. After graduating from college, she worked as an intern in a large company. When the protest against sexual harassment was ignored, she reported to the Human Rights Commission and left the company. She currently is unable to work elsewhere and lives on part time jobs. Her father is in the hospital, and her mother working at the restaurant asks her for money. Her boyfriend preparing the civil service exam is incompetent and behaves tactlessly. Seonghye, who silently endures working in the difficult situation, makes a deep impression without particular devices to dramatize, because the film centers on the characters´ feeling in everyday, instead of developing dramatic events. [KIM Youngjin] 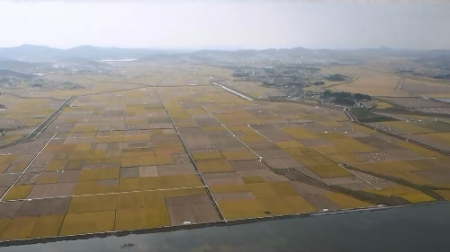 Lee Johoon, who minutely analyzed in his previous work Blackdeal (2014) why privatizations of public enterprises in many countries during the neo-liberalism were disastrous cozy relations between politics and business, is revealing state violence in [#i_]Land of Sorrow[_i#]. When the reclamation project of Seosan started in 1961, people were compulsively sent there and worked like prisoners. They were even married regardless of there will and forced to settle thare. The government didn’t keep the promise they would give them reclaimed lands. Historical situation about Seosan reclamation workers is incredibly shocking and it thoroughly shows violence and corruption of the Park Junghee regime. It is a journalism documentary that with various materials including lively interviews with people involved in the incident and footage, as well as reenactment of play. [KIM Youngjin] 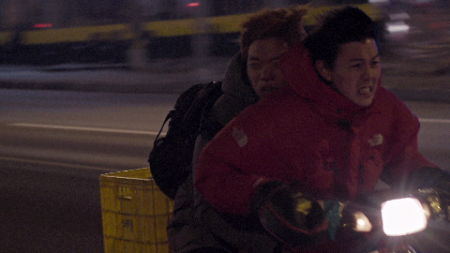 Geunsu is a defector who broke up with his brother in the escape from North Korea and has just settled in South Korea. He is having an uneasy day because he is troubled by his longing for his brother and cannot adjust to the strange reality in South Korea. Geunsu´s life becomes more dangerous, as he meets Jihyuk who lives as a Chinese restaurant delivery man, once convicted of theft. Geunsu suffers from Jihyuk´s suggestion to intercept drugs, who is enticed to work as a drug carrier. Among recent Korean films dealing with the lives of North Korean refugees, Dreamer introduces the darkest and miserable story. Free of the confines of crime genre, it gazes calmly at the despair of those who are inevitably going to a dead end, with the tone of documentary presenting the raw material as it is. [KIM Youngjin]

Express parcel delivery man Minkyu dreams to be a DJ. He is soon to perform his first deejaying at a club run by close friend Jihong. His girlfriend See-eun is grumpy because she thinks he is not fairly treated compared to what he does for the club. But actually, she also struggles dealing with a big load of task teaching students who prepare for a college entrance exam at an art academy run by her friend. Back from the Beat is the result of a cinematic attempt to draw more than what we can expect from the familiar topic of the young generation hopelessly surviving in the sweated labor environment. Camera work looks peaceful overall, but it becomes fierce now and than, and acting of the characters gradually becomes lively as story develops. It is impossible to hastily dream of hope, but the traces of desperation in their life cause resonance. [KIM Youngjin] 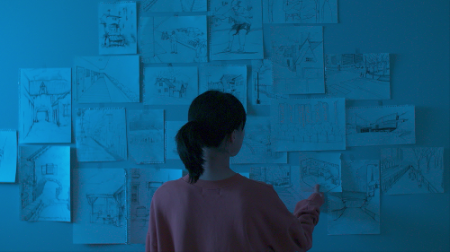 Hui Jiye’s Graduation, as the title tells, is a story about the future path of a university student who is going to graduate soon, but different from gloomy Korean independent films from the time, this film is bright and has no shade. One day, when Haerang, majoring in film production design at college, comes home after taking pictures to be used for graduation album, her mother says she has decided to separate from daughter. As she starts unprepared independent life, she is all by herself without mother or any close friend next to her. Living alone without the fence so called family or friend is so natural in a sense, but she has to struggle dealing with the situation, which makes her look cute, desperate and hopeful at the same time. Hui Jiye’s directing is lively and young, so she delivered the bright energy intactly into the screen. [KIM Youngjin]

14-year-old Kyungun meets her uncle Jaemin for the first time at her father’s funeral. Jaemin, who can’t be mistaken for anything but a swindler, takes all the insurance money left to Kyungun only to lose it all. To get her money back, Kyungun joins his next scam aimed at the local pharmacist and pretends to be his daughter. As they jump out of the frying-pan into the fire in a series of comical situations, a child who seems like an adult and an adult who seems like a child come to rely on each other in their struggle through the lonely world. Director Kim Inseon calmly portrays the development of the relationship between the two without any exaggeration, and succeeds in drawing us in. Their misunderstanding towards each other turns into a mutual understanding. The two leading actors strike a calm balance through their performance. [LEE Sang-yong] 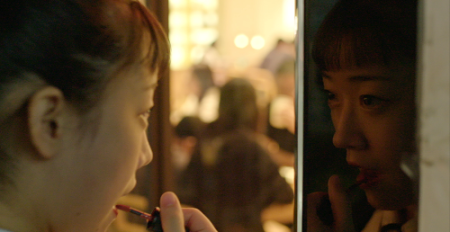 Some films seem to wholly belong to actors. Actors do more than just conveying messages to audiences and make it possible to establish the world inside the film. Dong-a is one such example. Shim Dalgi who plays the title role holds up the film´s world. Don’t get me wrong. I’m not trying to discuss the merits of directing and acting. When Dong-a goes to a motel with her boyfriend, she takes a long look at the out of season Christmas tree and steals another quick glance from inside the elevator. Kwon Yeji’s directing in this scene is impressive. Dong-a’s emotions are detected not just on her face. If what she sees, her face and the cold world around her do not match up properly, what powers of persuasion can her expressions have? The film shines with brilliance thanks to the trust the director and the cast place in each other. [AHN Sihwan]

How can we compensate for the retraction of an employment offer? The rough sum of the interview fee and the cost of transportation and food comes to about 100,000 KRW. However, the cost of setting one’s life back on track can´t be calculated precisely. Sujin ends up on the street because she canceled the lease of her room. She asks for her job back at the convenient store, and stays with her friend for a few days. Further, she gets her money and books back from her study group. People feel sorry for her at first but soon start avoiding her. Sujin hardly ever reveals her emotions, and appears almost brazen. Her strong personality leads us to focus on her situation rather than her feelings. We must experience a day in her life trapped in situational constraints. This is one of the loneliest battles which can never be shared with anyone. [KIM So-hui]

In world where all films have disappeared, a man who used to be a film critic starts analyzing everything he lays his eyes on. Apocalypse Runner starts from this absurd premise. Director Cho Hyunmin builds upon the frame of the Revisionist Western and vacillates between various cinematic cliches and homages. Indeed, this kind of approach runs the risk of falling into the trap of cinematic fetishism. However, the film narrowly escapes from that danger through the self-conscious approach towards ‘a cinephile’s dilemma’. Cinephiles tend to see and interpret the world through the filter of cinema, and thus acquire an unrealistic sense of reality where cinema and reality get mixed up. When we place these qualities in the center of the film, the cinematic fetishism becomes not a weakness but a part of the director’s intended impact. [AHN Sihwan]