We share our second report about the Film Distribution in Metro Manila, Philippines.

About this report:
The Film Distribution Observatory (FDO) is a long run Research & Database about the movie distribution in the NCR Region (Philippines). The main objective is to know how big chain cinemas manage and distribute movies. Cinemas managed by FDCP and UPFI were not included. We also skipped smaller cinemas such as Cinema Centenario, Black Maria Cinema and Cinema’76. The list of the 65 cinemas covered by this Study can be seen HERE. *This month we miss one day: April 22nd*

On April, 63 films were screened in Metro Manila cinemas. 43 (68 %) were Foreign Films and 20 (32 %) Local Films. There were 2 local premieres: “Almost a Love Story” by Louie Ignacio (Regal Entertainment Inc.) on the 11th, and “DOTGA: Da One That Ghost Away” by Tony Y. Reyes (Star Cinema) on the 18th. “My Perfect You” (Star Cinema) and “Never Not Love You” (Viva Films) premiered on March, continued in the billboard until the 24th. Three horror movies from last year were able to find screening quota this April; “Haunted Forest” (Regal Entertainment Inc.), “Spirit of the glass 2: The Haunted” (OctoArts Films and T-Rex Entertainment) and “Pwera Usog” (Regal Entertainment Inc.). Cine Lokal presented three movies on April; “Mga Gabing Kasing Haba Ng Hair Ko” by Gerardo Calagui (lasted 2 days), “Bhoy Intsik” by Joel Lamangan (Solar Films – Lasted 2 days), and “Throwback Today” by Joseph Teoxon (Cinema One Originals – Lasted 5 days). There was a Special Screening at Greenbelt and TriNoma Mall Cinemas (Ayala Malls Cinemas) dedicated to 10 classic Filipino films that lasted from April 18th – 24th. 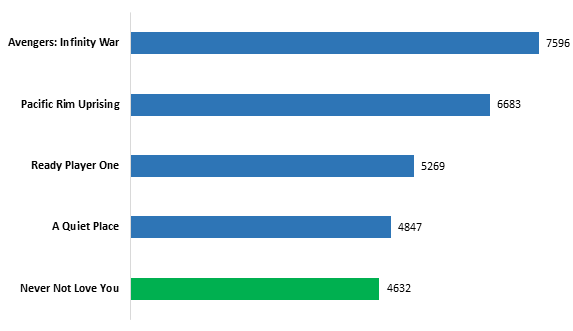 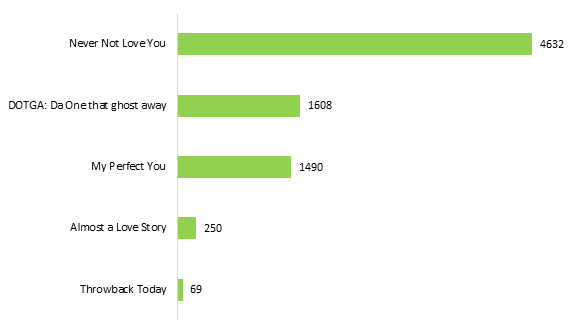 When we graphed the daily distribution of Local vs Foreign films (in %) we discover that Local Films got more screening time than last month but it suffered great with the premiere of “Avengers: Infinity War”. It got to a record low below 3% that lasted six days. The Local % was high at the beginning of the month thanks to the screening of films such as “My Perfect You”, “Never Not Love You” and “DOTGA: Da One That Ghost Away”. 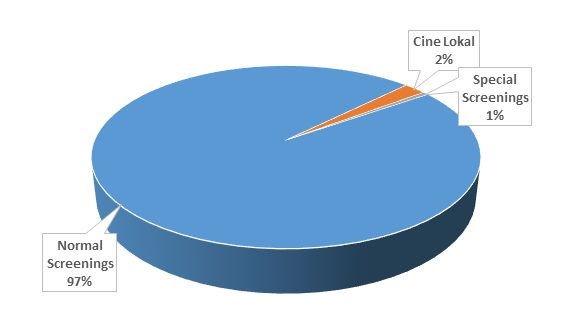 When looking at the releasing companies we found out that only two companies lead the industry. Viva Films came on top with 56% of the screenings due to the projection of “Never Not Love You”. And Star Cinema (ABS-CBN), with 37% of the screenings thanks to “My Perfect You” and “DOTGA: Da One that ghost away”.

When looking at the distribution variation of Local Films we can see that “Never Not Love You” (premiered on March 31st) stayed on top. “My Perfect You” that was premiered on March 14th, was able to maintain a good number of screenings. Both Films drop on the 11th due to the premiere of international films (“A Quiet Place” and “Rampage”). On 18th “DOTGA” got their premiere and the film was able to get good screening numbers until the 25th when “Avengers: Infinity War” was premiered. 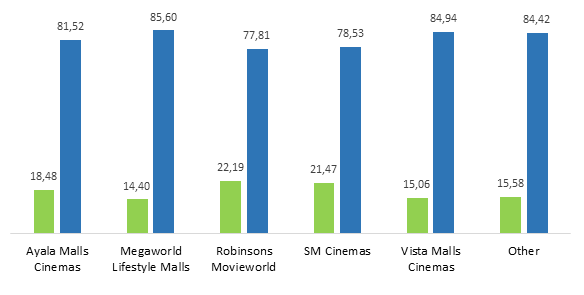