We publish more information about the feature films selected for the Bangalore Queer Film Festival 2017 that will take place from February 24th – 26th in Bangalore (India) at the Alliance Francaise and the Goethe-Institu (Max Mueller Bhavan).

Ajeeb Aashiq / Strange Love is a tale of unrequited love, betrayal, and friendship. A stylish working class transgender man, Khush crosses paths with Bollywood singer Suman in a contemporary portrait of Mumbai. The cinema-verite style film chronicles Khush’s journey of becoming a man and Suman’s critique of hetero-patriarchy through her creative voice. The intimate gaze of the film paints a compelling portrait of a city hanging in the balance, skewed by poverty and class divide on the one hand, united on the other hand by the characters’ longing and pursuit of a utopia.

A soon-to-be-father policeman falls for a gay fellow officer and his life starts falling apart. 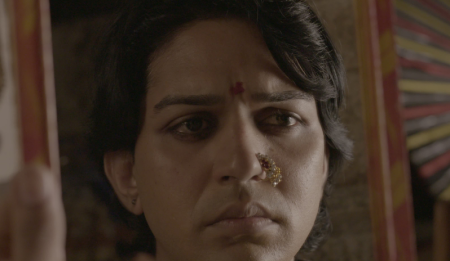 Chronicles of Hari begins with two young documentary filmmakers interviewing Yakshagana artists. Yakshagana is a type of Indian folk theater in which all the characters are played by men. The documentary crew wants to research Harishandra, known to have killed himself despite his popularity in playing female roles. His story shows how a society with strong prejudices toward gender roles can destroy a talented person.

Harishandra played female roles on stage at night but lived as a man during the day, but soon the boundaries between night and day, the stage and reality became blurred. The resulting an identity crisis and social prejudices made looking into his own desires an impossibility. Because he played female roles, he was excluded from heterosexual relationships and marriage. When he tried to cross gender roles by wearing a skirt in everyday life, people who had admired him started to despise him. This mockumentary appropriately conveys his fragmented and fluid life as he spans the gender divide as well as art and daily life via an episodic structure based on various interviews.

Three young people, Haris, a gay painter; Vishnu, a rural kabaddi player and their friend Sia, an activist who refuse to conform to dominant norms of femininity, struggle to find space and happiness in a conservative Indian City.

A documentary about the life of an ex-transvestite: from his miserable childhood, marked by his semi-slavery work and begging, to prostitution in the streets of the capital of Paraíba until his transformation into a protestant pastor. With the construction of his own church, he does a social work in the poor community where he lives. Besides he dedicates himself to what he considers his greatest mission: to bring gays, lesbians and transvestites to the Lord and into heterosexuality. (Bertrand Lira)

Émilie’s first movie is about his half-sister, Pauline, who desperately wants to leave his uncommon family. Although his brother and sister have fled the regular house fights and conflicts, Pauline stays, unable to get out of there.

Raju, a 12-year-old runaway, steps into an unknown, never-seen-before world on the railway platform. Timid, insecure and unsure, he falls into the hands of a gang involved in illegal businesses. Jollu, a gang-member of Raju’s age and a substance addict, teaches Raju the tricks and trades of surviving on the platform. They realize that while platforms are divided among gangs for selling spurious drinking water, the trains themselves are free for anyone. Both Raju and Jollu reconcile with another platform-boy and start selling water on their own, undercutting their boss and inviting danger to their lives. 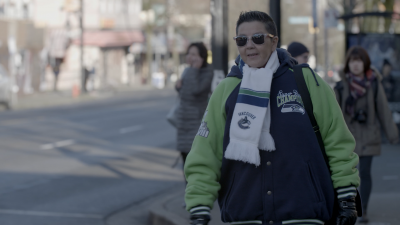 A fascinating look into the lives and thoughts of seven queer pan-Asian Canadians as they look back on a 1984 documentary in which they featured. How have they changed? And how has the world around them evolved and changed?

Charlie is an average French suburban teenager, but when she becomes fast friends with Sarah, the rebellious new girl at school, she discovers there’s nothing average about how she feels.

Sannata is a queer adaptation of the one act play named Sonata by renowned Marathi playwright Mahesh Elkunchwar. The story of Sannata revolves around three gay bottoms Zameer, Manoj and Rosa, who live a non-conformist, unconventional queer life, free and outrageous but also lacking, lonely and not at peace with themselves.

The action takes place in a simple but tastefully furnished drawing room at one night. Three friends share their innermost thoughts; they fight and hurt each other, yet find a deep sense of bonding to survive the struggle for happiness, love and contentment.

Velutha Rathrikal (White Nights) is an independent cinematic adaptation of the eponymous novel by Fyodor Dostoyevsky. Manu is an artist in search of a new sky, from his troubled past, in a forest settlement. He meets Chelly, a tribal girl from a nearby settlement who bears the burnt from her own share of life. As she awaits the return of her beloved friend Jyothi, Manu gets closer to her. Despite their diverse upbringings, Manu and Chelly strike a serene and beautiful chord with each other. Their brief but intense encounter during the five nights makes the plot of the film set against the deep woods of Attappadi and surroundings.