The organizers of the Hong Kong International Film Festival (HKIFF) have announced that Mr. Louis Koo Tin-lok will be the festival Ambassador for this year’s edition. They also release the new Key Art designed by Mr. Wong San Mun.

For the fourth consecutive year the Hong Kong International Film Festival (HKIFF) have named Mr. Louis Koo Tin-lok as their Festival Ambassador, who will promote the HKIFF and the Hong Kong film Industry throughout the festival.

About Louis Koo Tin-lok:
Louis Koo Tin-lok, born in 1970, is a Hong Kong world-renowned actor. He began his professional career in local television series, winning TVB’s Best Actor Award in 1999 with Detective Investigation Files IV and in 2001 with A Step Into the Past. In recent years he focus primarily on his film career, becoming one of the stalwarts of the Hong Kong film Industry. He has work with Johnnie To in various films, Election (2005), Triad Election (2006) & Drug War (2012) to name a few. Other known films are Protégé by Derek Yee and Little Big Master (2015) by Adrian Kwan. He is also a UNICEF ambassador since 2007. 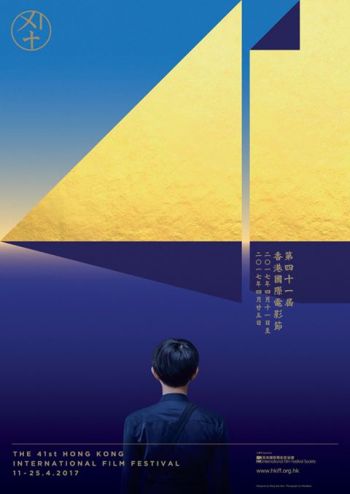 The organizers also presented this year new Key Art designed by Mr. Wong San Mun, a very talented and experience graphic designer that have work with the festival last year. Continuing with the simplicity from last year, Wong added an origami to represent the “41”. The symbol “X”, a numeric system commonly employed in the Southern Sung dynasty representing “4” in Suzhou huama script, is again included as one of the key elements to represent the unique cultural and distinctive code of the city. Wong’s design also pays tribute to the late director Edward Yang’s Yi Yi.

About Wong San Mun:
Wong San Mun has been involved in numerous Won Kar Wai films. Wong is also active in working with local singers on designing CD covers and as Art Director for fashion print advertisements and other design works. He is also the key art designer of the 40HKIFFF.