We present the list of winners of the Seoul International Youth Film Festival (SIYFF) that took place from September 29th – October 4th in Seoul, South Korea.

There’s a spring fountain besides the Land Good Temple (Tudigong) in Yilan. The film was directed by YI-LAN Elementary School Gifted Class. The spring is a unique place to rest with the waters warm in winter and chill in summer. Every day many women, young and old, start gathering around here when the dawn break. What’s the magic of the spring fountain that attracts the moms and grandmas all year round?

My treasure is a book, with pages worn and folded, which still shines the gold of enchanted words. This film is a particular and creative look at a contemporary musical work of Fernando Lapa with the lyrics of Alvaro Magalhaes, produced for the Bando dos Gambozinos School.

The Loneliness of the Short Distance Runner by Holly Jacobson
United Kingdom | 2016 – 8 min.

Late at night, after she should have gone to sleep, young Zoe creeps out of bed to confide the source of her excitement with us. A local children’s fun run leads her to dream big – perhaps she will go all the way as a top athlete – in fact she’s sure she will! She is unintentionally and increasingly hilarious whilst being totally endearing.

Once upon a time there was a girl who lived on the edge of a great forest. She always wore a red cap and was therefore called Little Red Cap. Children produced their own thriller version of this fairy tale.

αβ (Alphabeta) is the ideal society: safe, organized, conflict-free. There is no reason to leave the perfect society where everyone has intelligent glasses attached to them. However, K, a good citizen of αβ, finds herself questioning everything and everyone she has ever known when the government faces its worst fear.

The relationship of two siblings living in the badlands is disturbed by the arrival of a mysterious stranger. Events leading to ultimate freedom are set in motion and the wind is constantly blowing. 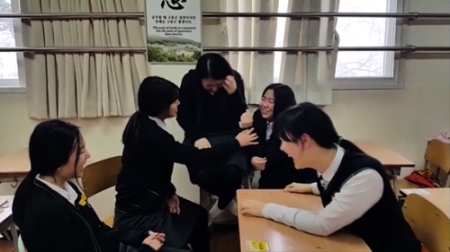 Cheerful sixteen-year-old teenage girls enjoy their lives by laughing and chatting with their friends at school. However, the most unfitting captions evoking despair and pain suddenly appear on the screen. When people get confused, the screen is shown in black and white with darker meanings of captions. Finally, intention of this movie comes out into the open. 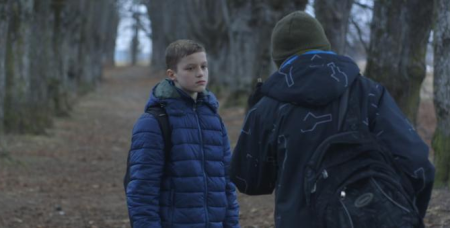 “Culprit” is a short drama about a 12 year old boy, Indrek, whose another day starts with his mother putting effort to convince him to go to school. Submitting to mother’s will, he takes the road to school where he bumps into one of his bullies – Denis, who forces Indrek to play a prank on a homeless man. When the consequences of the prank seem more serious than Indrek had expected, he finds himself confronting Denis, who forbids aiding the homeless man. The day gets even worse for Indrek, when he gets cornered and attacked by the homeless man when he least expects it. Being taken to the police, and having not forgotten about the prank, Indrek now stands between the question if he is the victim, or the culprit.

“The World is made of floors, connected by stairs, and made of rooms”. Such is the vision of a child and his siamese head, bricked up by their mother in the family manor since they were born… until one day, when, after seeing a strange light, they swear to find… the end of the World.

Cafeteria in a high school, ‘Song Jae’ eats meal alone. Old enemy ‘Young Shin’ bullies Song Jae. However Song Jae doesn’t defend and resolve desire of repressed violation with just fantasy. SongJae leaves to avoid Young Shin made Young Shin be upset instead and got humiliation in front of other friends. However, other friends remained as spectators. Teacher ‘Ki Won’ who has to amend the situation scold SongJae rather than Young Shin. Gloomy cafeteria where no one stands by him. SongJae decides…

Hugo’s mother is back home. The following day, when Hugo wakes up, he finds black feathers all over his house.

To know more about this festival visit the FESTIVAL PROFILE or go to their official webpage HERE.