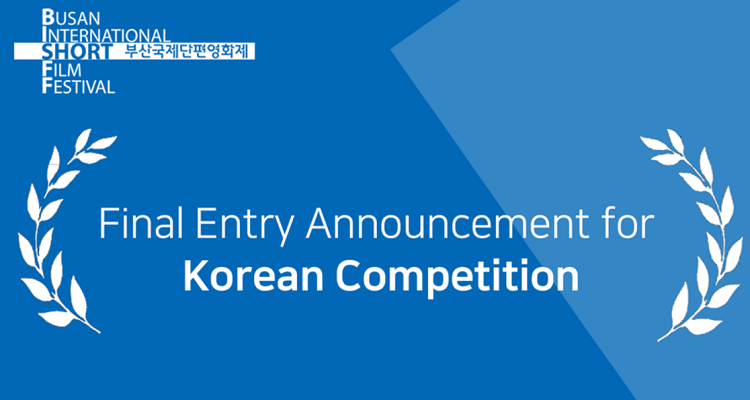 Twenty-three members from the preliminary jury, 19 from Korea and 4 from abroad, review over 872 Korean films to select the films that will compete at the Korean Competition. 78% of the entries were fictions, 9% were experimental, 7% animation and 6% documentary. As seen in other festivals there topics covered by the productions deal with the current social problems. Some of the topics are impoverishment, violence, history, disability and others relate to women, family and relationships. The organizers remark that films about gender issues, which has been a trend since last year, have mature in quality. The jury used two main standards in order to select the finalists; Short Filmness and Issue Awareness. They paid great attention to outstanding aesthetics, philosophical and artistic perspectives.

Korean Competition
404 Not Found by Uhm Haneul
Alright by Kim Hyojun
Capsule Coffee by Chung Haeil
Cicada by Yoon Seojin
A Cog in the Wheel by Lee Gyeong
Morning of the Dead by Lee Seungju
My Little Brother, Seung-hyuk by Kim Deokgeun
New Record by Heo Jieun, Lee Kyoungho
Night of Collapse by Lee Junyong
Observation and Memory by Lee Somyi
On My Way Home by Lee Seungkyu
Peach by Shim Sookyeong
Playing with Fire by Kim Sein
Rest a While by Han Kyungseok
Skin and Mind by Park Jeeyoun
Touch by Lee Miji
We Go Together by Jjo Seugwon
Yuwol by BEFF

We want to remind readers that the 36th Busan International Short Film Festival will take place from April 24th – 29th at the Busan Cinema Center.