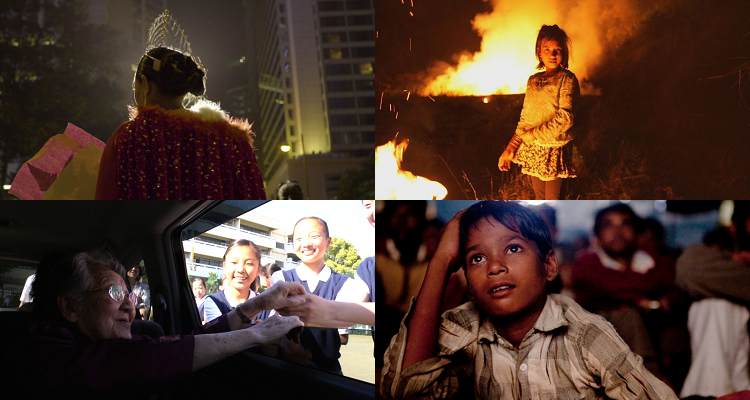 We present a list of 10 Documentaries you cannot miss at the 21th Busan International Film Festival that is taking place from October 6th – 15th in Busan, South Korea. 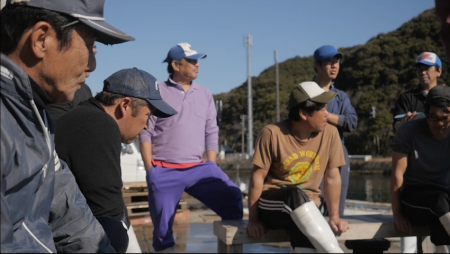 This investigative documentary film shows what is going on in Taiji, a small fishing village in Japan, after 2010’s The Cove, also a documentary that brought international attention to this village. The Cove featured a dolphin trainer who woke up to the fact that a whale is a mammal with feelings and that knows pain, and who went on to become an animal rights activist. The activists and the filmmakers (who won an Academy Award) spread out over the world the name of Taiji, where cruel whale hunting was ongoing. A Whale of a Tale is the sequel to The Cove, but it does not just regard Taiji from the viewpoint of Western activists; it listens to the Taiji villagers as well. Taiji has become a hot spot for anti-whaling activists, often militant, and cameras and binoculars now flock to the village in whaling season. The villagers claim that a whale is a precious resource for the village, once scarce of food, and that they perform a ritual for whales after the traditional hunt. Focusing on a place where provocative remarks are exchanged and the traditional culture conflicts with ethics, the film tries to say that understanding each other and having conversations is the true solution to the conflict. Still, there seems to be a long road to resolution and in the meantime, life is being slaughtered. (Minah JEONG – BIFF Catalogue 2016) 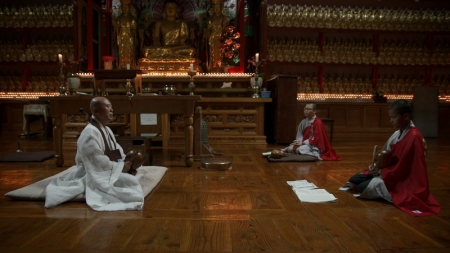 Two boys go to live in a temple. Sundong is sent there when his mother is deported, while Sundoo goes voluntarily when he is tempted to kill himself after suffering from school violence. The film starts with a scene where two boys shave their heads and continues to focus on their lives rather than on the temple itself. They have different skin colors and personal backgrounds, but they manage to get along. When they begin to understand and lean on each other, they are confronted with decisions to make. Sundoo chooses to leave while Sundong, who planned to leave when he reached his third year of middle school, chooses to stay. Life is something you never know and so is destiny. According to Buddhist teachings, you have to sow first before you reap. Following the lives of two little monks, you will be drawn to the sad relationships they are surrounded by and begin to feel for them. Maybe it is time for you to reap what has been sowed in the film. (BIFF Catalogue 2016) 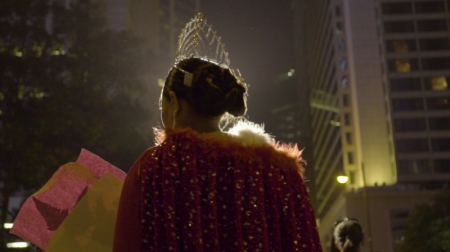 In Hong Kong, more than 190,000 female Filipina immigrants work as house maids. They live in with their employers and provide 24-hour services six days per week, with just Sunday off. Twenty-nine-year-old Cherry goes to Chater Garden near Central Station to enjoy her day off after a tough working week. Cherry and her friends are busy rehearsing their dancing and catwalk model walking for a beauty contest. Director Baby Ruth Villarama meticulously blends the exhausting daily lives of five such live-in maids and the dreamlike, one-day distraction of Sunday. Having hosted this beauty contest since 2008, Leo explains that this pageant is a charity event that enhances the self-esteem of female immigrants from the Philippines, and provides practical help too. The “Miss Philippines Tourism Hong Kong” event follows the typical format of government-led beauty contests. It’s hosted in the middle of Hong Kong’s Central area creating a subculture and it becomes the only space for these women to show themselves off, a moment when they can dream of something else and forget their identities as immigrant workers. (Hong Soin – BIFF Catalogue 2016)

Pitch Trailer (Will open in a new window)

A powerful documentary about an unprecedented political experiment in India. A group that organizes meetings to criticize government corruption forms a new political party, the Aam Aadmi Party (AAP), and jumps into the election campaign. Their chosen candidate, Arvind Kejriwal, proposes to stop corruption, completely reform utility bills, and decentralize political power, promises he made when he launched the party in 2013. His fight against the Indian National Congress Party, which has held power for the past 60 years, and the rampant corruption to which the people are already accustomed, is not easy. The camera captures this political experiment up close by following Kejriwal and the AAP over their two-year struggle to promote democracy among a people yearning for a new government but holding a deeply rooted mistrust of the state. Through an insider perspective, the camera does not hide the fact that it shares in the yearning for political change. And the efforts captured through this camera lens shines brilliantly between the final dramatic victory and the many moments of frustration. (HONG Soin – BIFF Catalogue 2016) 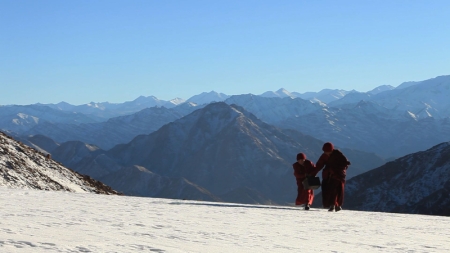 The film depicts the life of Angdu, the reincarnation of a Tibetan high monk, who lived 1500 years ago. Angdu was born a Rinpoche in a secluded village beyond the Tibetan border. A monk of a small temple is willing to make Angdu his disciple, noticing his uniqueness. But after Angdu is acknowledged as a Rinpoche, everything changes. The Rinpoche, without a temple of his own, and his poor aged teacher, now face a tough and hopeless reality, much harsher than ordinary monks’. Their journey is unsafe and despite the old teacher’s utmost support, Angdu’s memory of his previous life is slowly erased for lack of proper education for a Rinpoche; his manner become impatient and edgy. As the last attempt, the two gather whatever money they can for a journey to Tibet, but the old teacher and Angdu are compelled to turn back after gazing beyond the border. Like any unfortunate genius born at a wrong time, or like Oedipus of Greek legend, the film asks, “What is destiny?” (LEE Seung-min – BIFF Catalogue 2016) 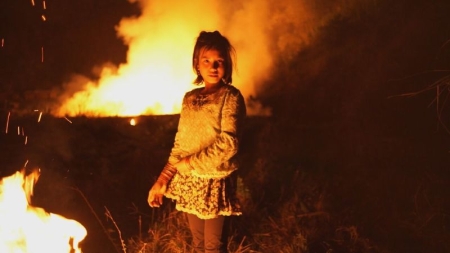 Ta’ang is Chinese documentary filmmaker Wang Bing’s new film, which focuses on a refugee crisis—but these refugees are an ethnic minority. The Ta’ang live in the mountains of northern Burma and are battling government forces. Ta’ang refugees leave their homes and cross the border into China. Wang carefully observed them for three nights and four days. On the first day, the film shows what look like Chinese forces pushing the powerless refugees to one side and inflicting serious violence on them in a Yunnan province transit camp. After this typical opening, the mood changes radically, as the film focuses on the activities and emotions of the refugees. Perhaps the most outstanding part is a one-hour shot on the third day, in which the refugees gather around a bonfire and are just talking to each other. Their hands and faces are reflected in the flickering bonfire on a dark night, delivering a surprisingly gentle closeness under a shroud of fear and uncertainty. The camera is perfectly positioned and its observational scrutiny switches to the poetry of light and sound. (CHO Hyeyoung – BIFF Catalogue 2016) 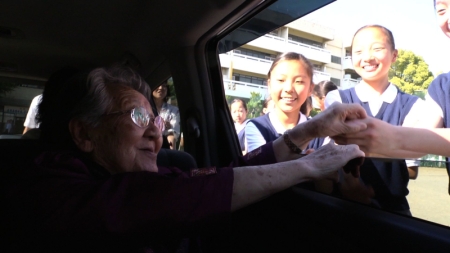 The Apology follows the personal journeys of three former “comfort women” who were among the 200,000 girls and young women kidnapped and forced into military sexual slavery by the Imperial Japanese Army during World War II. Some 70 years after their imprisonment in so-called “comfort stations”, the three “grandmothers—Grandma Gil in South Korea, Grandma Cao in China, and Grandma Adela in the Philippines—face their twilight years in fading health. After decades of living in silence and shame about their past, they know that time is running out to give a first-hand account of the truth and ensure that this horrific chapter of history is not forgotten. Whether they are seeking a formal apology from the Japanese government or summoning the courage to finally share their secret with loved ones, their resolve moves them forward as they seize this last chance to set future generations on a course for reconciliation, healing, and justice. 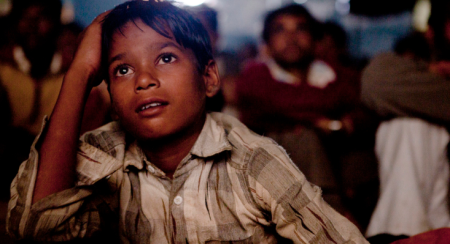 A tent is pitched in the middle of the festival grounds and an old projector is readied for a screening. Light travels above the audience, gathering in the blissful moments as it’s reflected on the screen that hangs inside the dark tent. And so, even in the small villages in India, people were captivated by moments of wonder and the surprise presented by film. However, the age of India’s itinerant traveling projectionists, who have screened films in the remotest of areas of India for over 70 years, is coming to an end with the emergence of the digital era. The old projector is no longer repairable, and new films are only distributed in digital prints. Cinema Traveller follows one such traveling projectionist for five years as he visits different festivals with his tent and projector in hand. It records the life and memories of those who have put their lives in the fate of the now obsolete film generation. The film, funded by BIFF’s Asia Documentary Support Program AND, was invited and screened at this year’s Cannes Film Festival and the Toronto International Film Festival amid acclaim for having captured a disappearing generation of film with graceful, beautiful image and story. (BIFF Catalogue 2016) 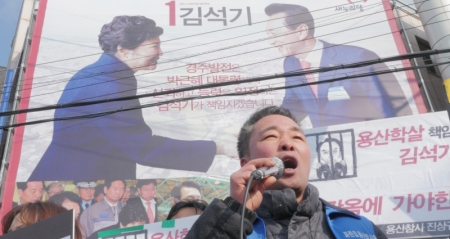 The Remnants profiles five persons, in fact victims of the Yongsan Tragedy, but instead prosecuted as perpetrators. They were accused as joint principal offenders just because they had been at the spot of the incident. The production group Yonbunhongchima, after its previous film Two Doors, attempts a different approach with this work, though an extension of it. Two Doors dealt with state violence through the police, whereas The Remnants tries to explore the reasons from within the community. The five interviewees’ confessional talk, mixed with remorse and self-examination, are captured subtlely by the camera. Deep trust combined with a strong outcry for truth must have opened up their hearts to this extent. The film also catches a side view of the possibility that the last seven years of dwelling on the tragic memory might be only “my own truth”. As file pictures and evidence had limitations in Two Doors, human memories are also limited, and The Remnants points out that the search for truth cannot rely on memories alone. Truth is urgent with such limitations. (BIFF Catalogue 2016) 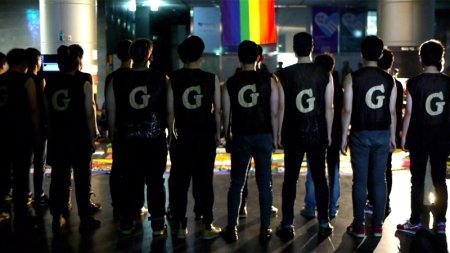 This is a story about the gay choir G-voice. Formed in 2003, G-voice is a way to tell stories about sexual minorities through music as well as a place of amity and healing. The film focuses on individual members as they gather together every weekend for chorus practice and heal through that, rather than the choir itself. They grow from “me alone” to “together”, and to “solidarity,” and the film reflects this process for both individuals and the group with genuine warmth. While the film shows dignified“ human beings with different jobs, from doctors, pharmacistsand designers to students and activists, all with various tastes, they frankly and delightfully talk about their love affairs, with pain and joy, with loneliness and love alike. Cinema is a wonderful and courageous means by which to stand against prevalent prejudices rooted in ignorance and unfamiliarity, then uneasiness, and finally loathing. The cinema itself is in very high spirits, as much as the characters in it.